Can Dollar Extend its Best Week’s Rally in a Year Post Trump Win? 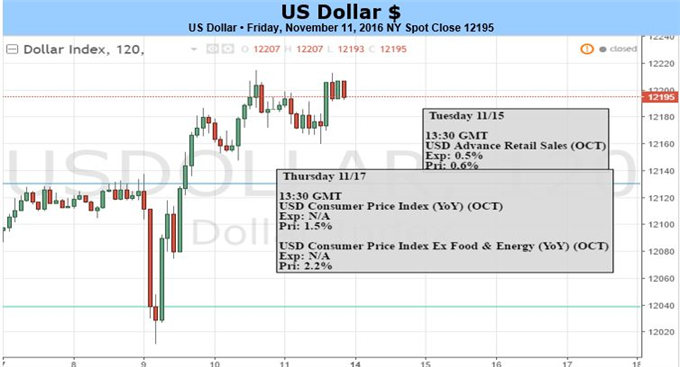 The trade-weighted ICE Dollar Index posted its strongest weekly advance in 12 months with this past Friday’s close. Those gains did not come quietly however. The volatility through this past week was extraordinary and clearly linked to the unexpected win of Republican Presidential nominee Donald Trump at the polls. A charge higher from the US currency alongside local equities can be interpreted as a ‘patriotic’ move or a positive growth outlook. Yet, that is too simplistic a connection with too many uncertainties and conflicts to hold out. Markets are weighing the possibility of fiscal stimulus versus anxiety over faltering trade. Dollar traders look to rising inflation forecasts against the stability of risk trends to gauge the Fed’s intentions. Turbulent times are ahead.

There is little disputing the Greenback’s strength this past week. On an expanded list of liquid currencies (majors, BRIC, Nordic, Asia Pac, etc), the Dollar rose against all but the British Pound through the period. This strength can be attributed to multiple fundamental connections, but they offer little conviction that the charge is steadfast. The first channel to weigh on is the ‘patriotic’ trade which suggests growth potential in the US is more promising than global counterparts which thereby diverts capital flow to local assets. The platform that President-elect Trump has run on includes the possibility of fiscal stimulus that can pick up the slack for monetary policy that had lost traction – and is losing traction across the globe – some time ago. That said, details are sparse, global headwinds are gaining and confidence in external support is a prominent theme. Uncertainty is still exceptionally high about what the future holds in the US, and speculators are only so willing to stretch exposure given their already-leveraged position.

While the effectiveness of domestic policies may or may not be, we may see a more consistent bolster for the Dollar in the universal detriment to the United States’ largest trade partners through proposed trade policies. A resounding part of the Trump platform against the global rise of protectionism was the vow to renegotiation, scrape or withdrawal from global trade deals that were not perceived as beneficial to the US. That includes NAFTA and TPP as well as labeling China a ‘currency manipulator’ that it could impose tariffs on. This global withdrawal from globalization is detrimental for all long term, but in the short-term it hurts export-dependent nations and currencies more while the consumer countries (like the US) may enjoy a short-term boost. Should it immediately devolve into a trade war, no currency will win, but volatility will grow by leaps and bounds.

This uncertain global picture draws another uncertainty – that of risk appetite trends. While the S&P 500 posted its strongest weekly rally in over two years, the optimism clearly wasn’t universal. Global equities, emerging market assets, high-yield and other assets on the sentiment spectrum struggled or out-right suffered. Before the US election, investor confidence globally was already faltering and little has changed to alter the structural balance between over exposure to high risk and low return. In a full-tile risk aversion, the Dollar will benefit, but it would likely suffer alongside most others as it drops through the interim levels of confidence.

Perhaps one of the most prominent sources of fundamental strength for the Greenback moving forward is through its traditional monetary policy advantage. The only major currency to have enjoyed a yield hike, the market is pricing in an 84 percent probability of a follow up at the anniversary to lift off on December 14th. Given the rise in inflation pressures and the Fed’s persistent warnings to that effect these past months, such confidence is warranted. That said, it is also highly exposed to volatile currents. Rising bond yields says price pressures are returning but commodity prices have sunk. The group’s dual mandate – employment and inflation – may hold up, but they can be easily put off a hike path if market volatility rises. We have seen that numerous times over the past two years with reasoning like ‘market turbulence’, ‘China’ and ‘global finances’. If everything holds as is, a hike is indeed a strong probability. Yet, it is difficult to make that a more certain outcome from our current standing, and it is very easy to undermine it.