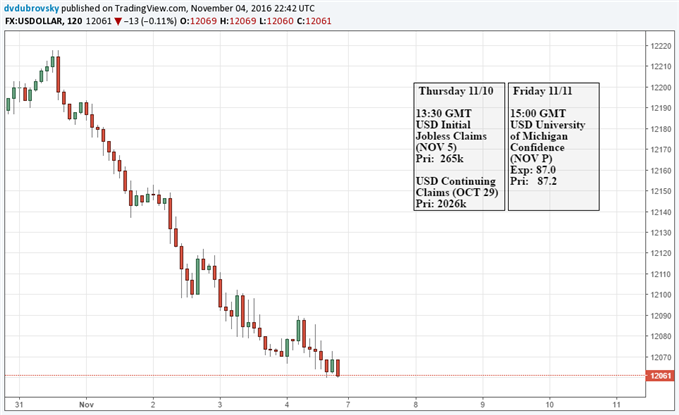 A Risk Response is Clear, But How Does the Dollar React to Election?

There is little doubt that the US Presidential Election next week is the global market’s top event risk. The implications for risk trends is clear with the longest slide for the benchmark S&P 500 in 36 years (9-day) through Friday. That sets the scene for volatility and perhaps even trend from the sentiment-oriented asset classes. However, the implications from this event for the Dollar are not so straight forward. While a swoon or surge in general market confidence can have its impact on the Dollar, the currency’s own ties to the elemental theme have bene distorted by its monetary policy standings. Short of an extreme outcome on that front, the focus could very well quickly shift to other considerations currently pushed to the backdrop. What should Dollar traders watch and expect next week?

While the Dollar’s reaction to the outcome of the US Election may be complicated, that is no reason to overlook its influence. While the view from within the country is extremely divisive –such that either candidate’s win will trigger the angst, anger and fear of the ‘other half’ of the electorate – the view from outside is what matters to the value of the Greenback. This is a relative market whereby the positive and negative outlook for the Dollar is pit against the positives and negatives of the Euro, Pound, Yen and more. That said, the assessment is most likely to be weighed by how aggressive the protectionist agenda is for the victor. Vows of trade curbs on China, Europe, and the rest of the world (which both candidates have suggested to differing degrees) will be weighed as a threat to the Dollar’s reserve status versus the economic impact to trade partners from stunted demand from their largest consumer. Even if we knew the outcome of the election itself, it still wouldn’t be clear how the market prioritizes these views.

Another aspect is the assumption of where the ‘risk’ is felt. In the event that global sentiment is pulled lower with the results of the election, that does not necessarily mean that the Dollar would suffer the worst of the fear. In fact, looking back to the Great Financial Crisis where one of the key sparks was arguably the US-based subprime housing derivatives implosion, the US currency still rose is the ensuring risk aversion as panic leveraged demand for US Treasuries and money markets that overrode concern for the US economy and financial system. Alternatively, a positive ‘risk’ response to this event is likely to lift pained global counterparts faster than local assets. That said, ‘relief’ will shift the focus on another aspect that has been sidelined temporarily by the polls fixation: Fed forecasts.

Two, four, eight weeks after the US election passes; we will likely see the impact of the event fade into a more subtle promotion of the prevailing trend. There is certainly capacity for the change in leadership to contribute to the bigger picture bearings on speculative positioning; but sentiment’s drive will likely draw from more elemental sources. That means other drivers will likely return to the forefront for global markets and even the Dollar itself. The probability of a December 14th FOMC hike is a factor that is likely to regain its sway over the market after this event passes. According to Fed Funds futures the chances of a hike before year end stand at 78 percent through Friday which is a significant gain over the previous few weeks. Yet the Dollar slid. That is evidence not of a broken fundamental driver, but the market prioritizing. When the risk factor passes, that theme will return. After the Fed’s statement and the strong wage growth in NFPs this past week, a rate hike looks like a high probability. So long as risk doesn’t subvert those chances, a refocus could support the Greenback. – JK