Dollar Run Not As Robust as Bulls Think, Needs Euro or Risk Stumble 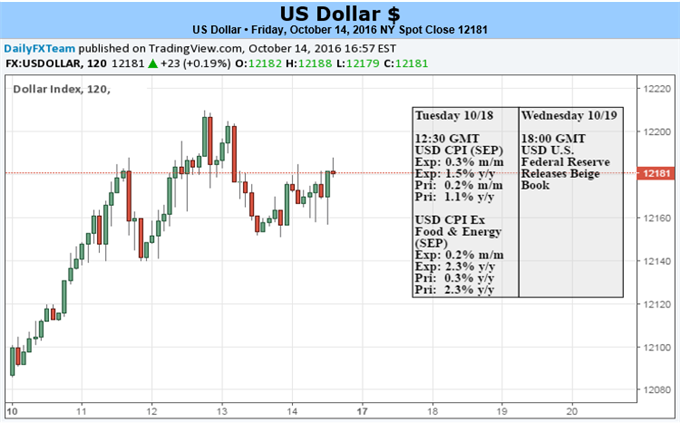 How strong is the Dollar? This past week, the DXY Dollar Index posted its most robust weekly advance (1.44 percent) in nearly eight months. Yet, there is a trade-weighted bias in this this measure that gives considerable deference to the EUR/USD, GBP/USD and USD/JPY (descending in that order). It so happens that the performance of these pairs followed that same order of liquidity, and the remaining crosses were far less impressive. This suggests that the Greenback is not pulling its own weight at the moment and instead enjoying the spoils of weaker counterparts. That can be a reality that persists to the benefit of the Dollar moving forward, but it is a less stable prospect with greater risks of destabilizing. Will schadenfreude drive the Dollar? Will Fed speculation reclaim power? Is ‘risk’ even a factor?

In terms of imminent influence, Dollar traders’ first concern through the coming week should be the performance of its most liquid peers. At the top of the list – by a wide margin – is the Euro. The currency has tumbled this past week, and its top event risk ahead has the potential to substantially change the EUR/USD’s short-term bearings and even the permanent long-term standing of the world’s number two currency. The ECB rate decision ahead may seem like another benign, wait-and-see event like each of the events since the failed March implementation of the full shot-gun stimulus effort; but there is considerably greater potential here. Recently, we have seen ECB President Mario Draghi warn that monetary policy was potentially reaching its natural limitations and even broach the topic of eventually having to pullback from the open-ended QE. A ‘taper’ is inevitable. And, its impact could be similar to the Fed’s course change in 2013 – positive for the Euro and very troubling for the Dollar.

While the Yen’s slide has been a significant source of strength for the Dollar via USD/JPY, the motivation of the move is fundamentally uneven. Risk appetite promoting carry is certainly not a unique driver behind the once-dominant Japanese funding currency. The belief that the BoJ’s ability to devalue the Yen hasn’t suddenly changed with what was considered the raising of a white-flag by the central bank. This looks to be a break from the skepticism drive and thereby dubious. For the Sterling, the Brexit-burning is a little more robust. Government commitment to stringent negotiations has curbed hopes for compromise much less a reversing of course. With data and surveys showing a quick fading of confidence, we have seen GBP/USD tumble to fresh three-decade lows. This sensitivity to will remain going forward, but there will be a natural saturation point should the risks not continuously rise.

If the Dollar is to rest back control of its drive – for better or worse – it will likely do so through Fed rate expectations. This past week’s Fed speak, upstream inflation data and slowing consumer confidence did little to lift the currency. Yet it also did little to cool speculation of a December 14 rate hike (ending the week at 66 percent). On deck next week, we have another wave of Fed speak – sans Janet Yellen. More capable from the data side though will be the market-favorite CPI consumer inflation report. The headline pace is expected to jump to a 1.5 percent pace (a two-year high) while core is seen holding (above target) at 2.3 percent.

As always, Dollar traders should also keep the pulse on risk trends. Full-tilt risk appetite is unlikely, but it would nevertheless reinforce rate forecasts for the Fed and thereby a Dollar advantage. A neutral bearing would have far more interpretation for currency traders. Jumping to panicked risk aversion, we would see the long-dormant return of the Greenback’s liquidity appeal. The increasingly probable and problematic (for the Dollar) scenario comes in the belly of this spectrum with modest risk aversion. While benchmarks like the S&P 500 would fall in this environment, so too would USD as it loses its interest rate advantage premium.