NFPs Stall Dollar’s Run, Where Will the Drive Come This Week? 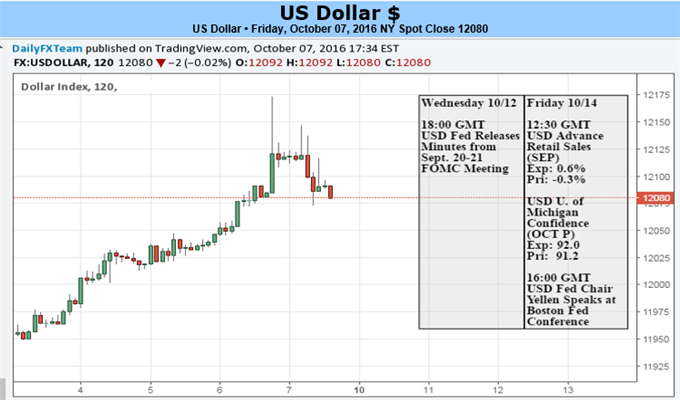 The Dollar enjoyed an impressive run this past week despite a grounded view of risk trends and little progress pushing forward expectations of a 2016 Fed hike. The 1.3 percent climb for the ICE Dollar Index was the largest since the Brexit vote drove shaken investors to the warm embrace of the world’s primary reserve currency. The motivations seem to be much the same: a need for a viable alternative to an increasingly dubious cast of peers. Will the appetite to herd capital into the best combination of yield potential and haven standing – without tipping into full-scale risk aversion – fuel the Greenback’s climb higher? Or, will one of the more familiar themes regain control over the benchmark currency and broader financial markets?

Heading into the new trading week, the most accessible fundamental theme for the Dollar to draw from will be the troubles of its major counterparts. However, some of these fires have burned intensely and may moderate without further fuel added to the pyre. For USD/JPY, the prominent technical breakout from 10 months of consistent bear trend lacks for tangible theme. Skepticism in monetary policy continues to build and that undermines the BoJ’s efforts to devalue their currency - implicitly of course. The drama of the GBP/USD’s collapse this past week contributed much to the Dollar’s haven appeal, yet it is difficult to distinguish whether it has been discounted severely enough or if events continue to barrage the Sterling already at three-decade lows.

It is through the Euro where the Dollar has noticeably generated little indirect strength. After more than a year-and-a-half of broad range, the past seven weeks have represented an exceptional downshift in trading breadth and magnification of pressure. We have yet to see a collapse in confidence in the ECB’s ability to keep the Euro suppressed similar to the Yen (or perhaps it was not driven to the same extreme on monetary promises). Nor has the existential risk to the EU and European Monetary Union spread from the overt fear rippling through the Pound. It would seem EUR/USD is bulletproof, but the same was thought about Cable and USD/JPY at different points over the past few years. And, when this benchmark pair makes a move, its liquidity will not be lost on the Dollar.

Aside from checking the crosswinds, the domestic fundamental themes are not offer significant traction. Rate forecasts have risen this past week - the probability of a 25 basis point hike at the December 14th meeting is the highest since the contract started trading (ostensibly due to the collapse of expectations for larger moves by this time frame earlier in the year). Data like the ISM PMI’s helped lift these projections, but the data that could truly fix expectations fell short of the mark. September payrolls were only modestly lower than survey forecast (167,000 versus the 170,000 expected), the jobless rate ticked up to 5.0 percent just slightly off multi-year lows, and average hourly earnings accelerated to the 2.6 percent pace expected. Skepticism had established itself through these trends, so it comes as little surprise ‘in-line’ readings offered further motivation. Ahead, the docket lacks for the fundamental drama with the University of Michigan consumer sentiment survey, upstream inflation pressures and the FOMC minutes as the top listings. Hardly conclusive data.

While the warning on risk trends may seem threadbare at this point, it is nevertheless a market catalyst that could systemically change market and financial structure conditions. Benchmarks like the S&P 500 have worked their way back into extraordinarily tight rangeswhile liquidity continues to bleed away yet volatility lingers. The crumbling of confidence in monetary policy (market-born) and fading outlook for growth (generally accepted after the IMF’s updates) represent a transfer of risk squarely onto the shoulders of the complacent market participant. It is not a question of ‘if’ but ‘when’. And, the transition from losing yield advantage to an outright demand for absolute haven will happen quickly for the Greenback in such an event.