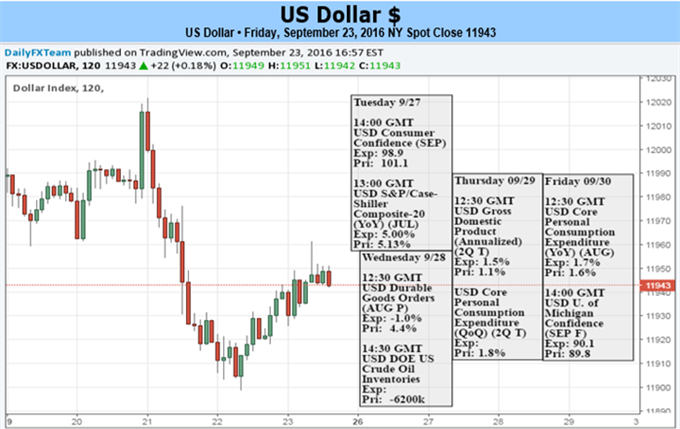 Dollar to be Jostled by Traders Speculation and Fed Officials Forecasts

The Federal Reserve announced to the market a ‘hawkish hold’ at its policy gathering this past week, and in turn offered little resolution to the market’s conflict over the Dollar’s current richness or cheapness. That makes it difficult to mount a committed speculative run – bullish or bearish – to break the Dollar free of the broad range that has solidified these past 21 months. Gaining a clear bead on rate speculation for the masses will be difficult with both the moderated outlook and limit on key event risk. Meanwhile, there remains an open opportunity/threat for risk trends to finally gain purchase; but the first flush of trouble may not immediately rally Dollar haven seekers.

The Dollar is in a unique fundamental position. On the one hand, the Greenback is the only major currency whose central bank is backing a hawkish lean which implies simultaneously a forward yield advantage in this reach-for-yield environment and a more durable safe haven whose economy is seemingly robust enough to weather removal of accommodation. That keeps the USD steadfast with holding onto the gains made over the past 5 years against all major counterparts. That said, rate speculation has overrun its reasonable economic tempo which has kept a steady drain on bullish interests. What’s more, this advantage persists in a time when investors are far more discerning about the risks taken for slim yield. In turn, this looks like a dubious balance awaiting clarity, similar to the S&P 500.

Though it may lack for a spark with the capacity to singlehandedly revive trend, monetary policy will provide the most abundant fundamental motivation for the Dollar through the coming week. We head into the new trading period with Fed Funds futures pricing in a sparse 19.3 percent probability of a hike on November 2 (just a few days before the Presidential elections) and 55.4 percent chance of a move on December 14 (what would be the one-year anniversary of ‘lift off’). Should these scales change, we can oscillate within the broad range on the ICE Dollar Index (850 points) and EUR/USD (1,225 pips). Currently, the Greenback is trading very near the center of these spans. Breaking the outer boundaries would take a shock or a remarkable consistency in the scheduled event risk.

From the docket, much of the data due ahead doesn’t present the most direct route to changing the monetary policy timetables. Housing data, durable goods orders, the advance trade report and PMIs are economically valuable; but consistently lack for market influence. Two reports stand out above the pack: the PCE deflator and the Conference Board’s consumer sentiment survey. The former is the Fed’s favored inflation report, and most officials agree that this is the point that is subverting the need to tighten more quickly. Headline annual PCE (including volatile items) is at 1.6 percent currently has held below the 2-percent target for four-and-a-half years. The pace of core inflation is a far more restrained 0.8 percent. The sentiment survey is valuable for components that include economic, wage, employment and inflation expectations – which can turn into price pressures down the line.

Compared to the data, the Fed speaking schedule offers more pointed opportunity to sway rate speculation. There are 14 separate speeches scheduled with Chair Yellen, Vice Chair Fischer, bulls and doves all on tap. Yellen’s testimony Tuesday and insight from the dissenters at the last week’s meeting (voting to hike) will carry the most market-moving heft.

Where rate speculation will offer the most proactive market influence, it is important to keep a weathered eye out for those influences that seem inert but can redefine the landscape should they stir. In the list of sidelined themes, risk trends remains a top consideration. The volatility and volume that revived capital markets on Friday the 9th is holding despite the familiar sense of lethargy trying to push back in. At present, any market-wide sentiment shifts immediately ahead would come without clear warning in scheduled events. However, if fear does start to shake loose investors, liquidity is likely to amplify the risk aversion and quickly rally the Dollar on inflows.