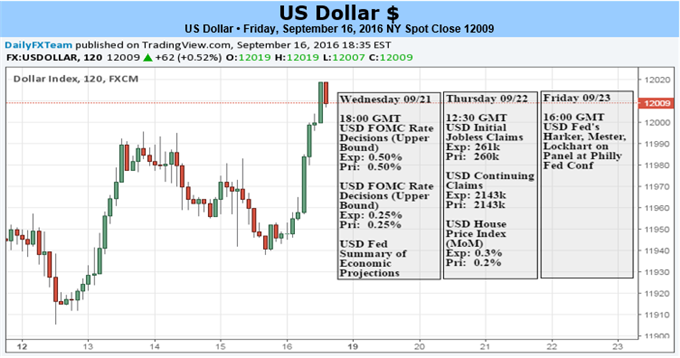 The outlook for the Dollar through the coming week is both highly uncertain and a clear risk of extreme volatility. Regardless of asset, the lightning rod for investors ahead is the FOMC rate decision on Wednesday, September 21st. This event stands at the intersection of the most elemental of fundamental winds: the appeal of relative yield; global confidence in monetary policy and universal risk appetite. These structural supports for the financial system have already come under considerable strain through other forces, but few solitary events carry the requisite weight to definitively tip the scales. This is one of those events. To draw clear sight lines on the Dollar, traders will need to keep sight of the bigger picture.

Heading into this major event, there are a number of aspects to the meeting that need to be evaluated for level and target of influence. On the surface, the first question is whether the Federal Reserve hikes its benchmark lending rate or holds it. Given the Dollar’s rise this past week on the back of encouraging data, it would seem that the markets are anticipating a reasonable probability of a hike from the policy group. Yet, that isn’t corroborated by the market’s preferred metrics. From Fed Funds futures, the chances given to a 25 basis point hike to the 0.375% median rate stands at a paltry 20 percent. Overnight swaps and short-term Treasury yields have offered little ground for such expectations. And, only 6 of 86 economists polled by Bloomberg (7 percent) believe the group can act.

Given the mixed view in expectations, it is not clear whether a hold on the benchmark rate would generate a material disappointment – and thereby decline – for the Dollar. That said, a hike would doubtlessly spur an initial rally for the Greenback. The last Fed voter to speak before the central bank’s self-imposed ‘blackout’ period (Lael Brainard) sounded a very dovish tone saying a preemptive tightening was ‘less compelling’. While the prepared speech may have just been a decision to ensure there is a dovish voice, it could have also been a strategic decision. Perhaps recognizing her colleagues are readying for a tightening she perceives as detrimental, she is attempting to make it clear she is not participant to the outcome. Or, feasibly, she lowered the market’s expectations at the last minute to force her peers to relent so as not to trigger unwanted financial market volatility…because trigger it, it would.

Despite the consistent effort by many Fed officials to acclimate the markets to a possibility of a rate hike and the strong showing from inflation figures this past week (core CPI for August rose to 2.3 percent and the Census Bureau reported incomes rose 5.2 percentin 2015), market skepticism remains steadfast. In fact, the Fed may have put itself into a scenario where doubt remains until the group actually moves after so many false starts. That said, the surprise that would result from any actual move promises systemic volatility – not just for the Dollar, but for the risk current in most assets. Should a move to withdrawal accommodation translate into a long awaited unwinding of excess speculative exposure, the Fed would most likely be sidetracked from further moves by the storm.

If the central bank instead holds its fire, the market will get to work with more productive speculation in assessing the probability of future moves. There are only two more meetings left after this month’s, and probabilities of a move by December have hovered around the 50/50 level. While economic forecasts and Yellen’s remarks will be absorbed, it will be the dot plot for rates through 2016 and curve over 2017 and 2018 that will draw the market’s attention.

In the event of full-scale risk aversion, the Dollar will not immediately jump to its haven status. Rather, the first phase of sentiment souring would be a diminished economic outlook and the subsequent loss of further yield potential. The more rapidly confidence falls apart, the better for USD as it will revive the absolute safe haven role. Sentiment however does not just hang on the Fed alone. We have seen volatility and volume rise through other contributions this past week. The BoJ’s quickly failing credibility along with the all-out doves could spark fears for the end of a stimulus-supported market boom. Brexit fears stirred this past week could infect deeper financial flaws. Or, the ‘animal spirits’ themselves could rise. Watch sentiment and the Fed through these tenuous times.