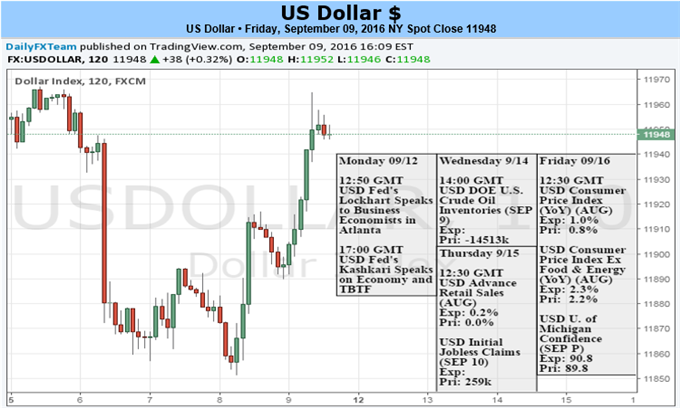 What Kind of Dollar Rally Arises from ‘Hike of Necessity’, Full Risk Off?

The Dollar – like most other markets’ benchmarks – has caught a glimpse of volatility after the seasonal transition, but still trades in a broader range. Participation and conviction are still absolute necessities to reviving a trend - whether for the Greenback or investor sentiment, bullish or bearish. While the volatility that closed out this past week with the biggest drop from the S&P 500 since the Brexit response is remarkable, it will take a lot to charge sentiment to full pace and in turn put the Dollar back on its safe haven role. Meanwhile, rate speculation will intensify as we enter the two-week ‘blackout’ period before the September 21st FOMC decision. It is important to separate what is probable and want we would like to see from the markets as the tempered conditions may encourage traders to reach to sate a need for trades.

While Friday ended with a strong move in long-dormant risk trends, the immediate focus for the Dollar may very well turn to monetary policy first through the open of the coming week. Frequent false starts in the long-awaited risk aversion shift and volatility revival have made the market ranks anesthetized to smoke that doesn’t have fire immediately behind it. What’s more, there isn’t a strong list of high level event risk that can readily concentrate the speculative drive. That said, monetary policy is certainly on the mind and there is key event risk to cater to its development.

Where attention has turned to rate speculation, it isn’t because there is a clear expectation of a particular outcome for the last three rate decisions scheduled this year; but rather because there has been so much volatility in the dovish to hawkish swings themselves. Data over the past weeks has shifted from dramatic swings in employment data (a strong June NFPs figure) to the recession fears borne of the ISM service sector report last week. The probability of a September hike dropped as low as 22 percent last week and only rose to 30 percent through Friday – hardly a hawkish consensus. However, a new view of rate hikes is starting to arise: a move of necessity rather than one of ideal circumstances.

We have discussed the risks of maintaining extremely easy monetary policy for too long for some time; but more recently, the concern has started to find its way to the mainstream and ardent doves. There was plenty of Fed speak this past week, and much of the known hawks seemed to be using the opportunities to speak to try and bolster the market’s belief and tolerance of a near-term hike so such a move wouldn’t cause a panicked response. That said, the views that really stood out were those from the dovish or neutral leaning officials through Friday. All three (Kaplan, Tarullo and Rosengren) admitted there was room to discuss tightening and all three also admitted there was risk associated to keeping at extreme accommodation for an extended period.

While those three wouldn’t fuel nightmares of the pain that could arise from such disastrous scenarios, it is hard to ignore the rise of concern from the Fed and other global monetary policy authorities. It will therefore be particularly interesting to see what FOMC Board member Lael Brainard – the Fed’s most dovish member currently – has to say the day before the two-week blackout period starts Tuesday. Forward guidance is still the Fed’s primary tool and it would be difficult to ignore any changes in tone from the group’s polar member. In contrast, few will question the verdict of Friday’s CPI – though its potential for surprise is far lower.

And, one last note on the risk front. While there have been many false starts, we cannot afford to drop our vigilance. Given the notional and thematic leverage in risky exposure coupled with the thin markets, a turn can prove abrupt and quickly engulf the financial system. Remain skeptical but prepared. If the market is selling everything not nailed down, the Dollar is a primary haven.