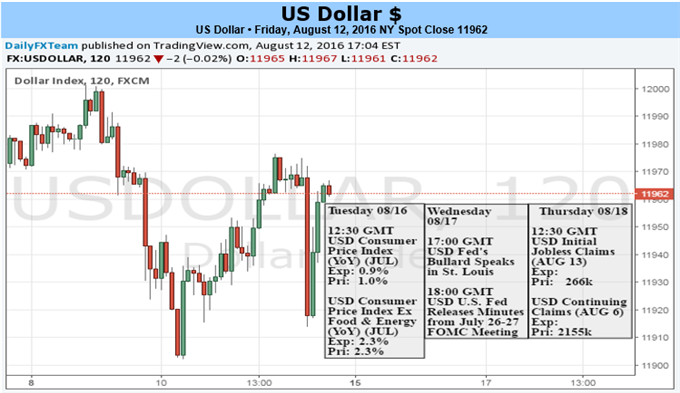 Conditions are extraordinarily quiet across the financial market, and the Dollar is certainly not escaping the lethargy. While the USDollar’s activity level – measure by the Average True Range (ATR) – is higher than many of its FX and alternative asset peers, it has been tethered to a constricted range. There are two general themes that are consistently market-moving for the Greenback: risk trends and shifting rate speculation. Neither faces the type of event risk that can carry the heft and scope to systemically change the currency’s bearings, but there is potential for volatility on the latter topic amide inflation data and central bank updates.

Through the past week, the Dollar lost ground versus all majors with the exception of the British Pound (sunk by fading growth expectations amid the post-Brexit watch). Yet, despite the near uniformity, there wasn’t much desperation behind the move. Most of its losses were held to less than 0.75 percent. There was little high-profile event risk this past week to overcome the dampened activity levels felt in the broader financial markets.

To give a sense of how remarkably quiet conditions are, we’ve seen the equities-based VIX drop to a two-year low on seven-week march lower. The S&P 500’s 20-day (equivalent to one trading month) average daily range has shrunk to 0.6 percent of current price – which we have only seen once outside of holidays in the past few decades. And the CBOE’s EUR/USD volatility index has slipped to levels not seen since October 2014. It is quiet. Looking ahead, there is little of the concentrated and scheduled event risk that we have seen change the tone of the markets. Those events are further out such as the Jackson Hole Symposium (the following week), the G20 meeting (the week after that) or the start of the next round of important central bank meetings (throughout September).

For the Dollar, the more likely fundamental motivation would come from a shift in interest rate forecasts – though even that will struggle for influence. Only a few comments from Fed officials slipped through the headlines this past week. San Francisco Fed President John Williams (not a voter) offered an upbeat assessment and kept the 2016 time frame in the realm of possibility, but Fed Fund futures show the markets remain skeptical with a 42 percent probability of a hike by December. Yet, that gives enough room for shifting rate views to both the dovish and hawkish sides.

Event risk surrounding rate speculation will come in two forms: objective and subjective. Objective is the data scheduled to cross the wires. In particular, the US CPI figures carry serious weight as the absent ingredient to the Fed’s simple recipe for rate hikes remains inflation. The headline figure is expected to tick down to a 0.9 percent pace (YoY) and core hold at 2.3 percent (YoY). If true signs of burgeoning pressure come through, it can have a more profound impact than the more vacillating NFPs. In the subjective column, we have Fed chatter. There are five separate individual speeches scheduled and the FOMC minutes on tap, but the markets are growing just as wary of the US central bank’s dithering guidance as other central banks actual actions (ECB, BoE, BoJ).

Barring a tangible change in rate forecast – for better or worse – the Dollar will be difficult to transition to clear trend against the backdrop of global indecision. The ‘Summer Doldrums’ are discouraging traders from participating and the Greenback is suffering both for its key liquidity appeal (safe haven) as well as its unique risk orientation via early rate hikes. While traders should monitor it for volatility, they should also be skeptical of trend for the currency.