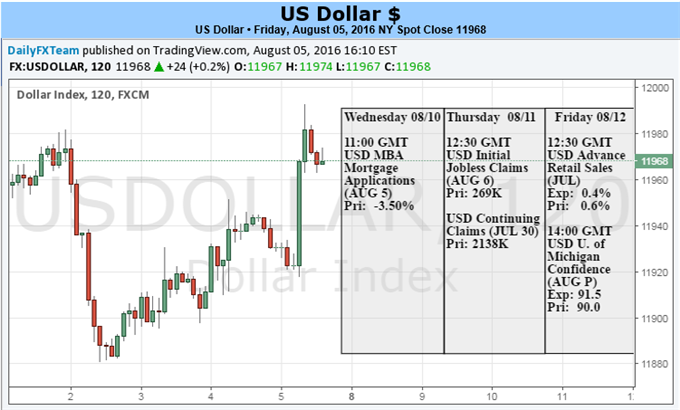 USDollar Resuscitated by NFPs but Bulls Difficult to Keep Satisfied

The Dollar recovered from an initial slip this past week to close the period in the green. However, the fundamental cost to lift the Greenback was remarkably high. It will be difficult for the currency to keep buoyant – much less maintain the pace of the rebound – heading into the coming week. Well-positioned fundamental motivation was distributed over the past few weeks to arrest the two-week tumble and in turn lift the USDollar up as much as 1.0 percent from its recent low. Ahead, the US docket lacks the authority to keep the charge. The comprehensive slide from the Dollar’s counterparts will ease without additional stimulus milestones. And, a change in risk winds may very well hurt the currency before it revives its haven appeal.

To appreciate the hurdles ahead, it is important to recognize the fundamental fuel that has directed the market recently. One of the most productive drivers was the strong showing from the US July labor report. The nonfarm payrolls (NFPs) bested forecasts substantially with a 255,000 net increase in jobs. It was just as much the ‘surprise’ element to the data as the general strength in a 4.9 percent unemployment rate and 2.6 percent annual wage growth that the Dollar. Rate expectations did improve on the news with the probability of aSeptember rate hike rising from 18 to 26 percent while the chances of a move by December rose from 37 to 47 percent. That is still far from erasing the skepticism that has kept hawkish calls in check, but the contrast between the Fed and its global counterparts remains cavernous.

In addition to the monetary policy advantage, the strong employment figures lend a stability ability to the US and its market. Following successive downgrades in growth forecasts for much of the world from the IMF and other international bodies, an economic flag like this does not go unnoticed. Along with the significantly improved 3Q GDP forecasts from the Atlanta Fed’s GDPNow (3.7 percent) and New Fed’s Nowcast (2.6 percent), the pain from the tepid 1.2 percent annualized 2Q GDP reading has dissipated. Here too, the Dollar’s standing is amplified by the weakness of its counterparts. Economic struggle and financial instability for the Eurozone, Japan, the UK and China lower the threshold for the US as speculative destination.

Yet, for the encouraging turn in data, the market traction it provided was rather anemic. The upgraded to the rate forecast was modest while the Dollar and US equity market lift was relatively small. That being the case, there is a notable lack of comparable fuel to attempt another, stronger push through the coming week. The University of Michigan consumer sentiment survey, upstream inflation (producer and inflation), and retail sales figures have provided little lift to either growth assessments or asset prices in previous releases.

What’s more, the global market will significantly downshift its scheduled contribution to the Dollar. Over the past few weeks, one of the key sources of Greenback motivation would come from the easing efforts of global central banks. The BoJ increased its stimulus program, the RBA cut rates and the BoE revived its QE program in a new post-Brexit program. Aside from the RBNZ and a few emerging market central bank meetings scheduled over the coming week, there is little in the way of comparable counterweight motivation.

The last high-profile outlet for Dollar strength would be its position as a safe haven. However, the currency is currently relying more on its investment appeal (higher yield potential and stability) to international market participants than its capital harbor appeal. If there were a significant downdraft in sentiment ahead – which is a growing probability – the initial shift may undermine the Greenback. The more intense the demand for safety-at-any-cost, the USD will find its safety appeal grow. But, that may take time and drawdown.