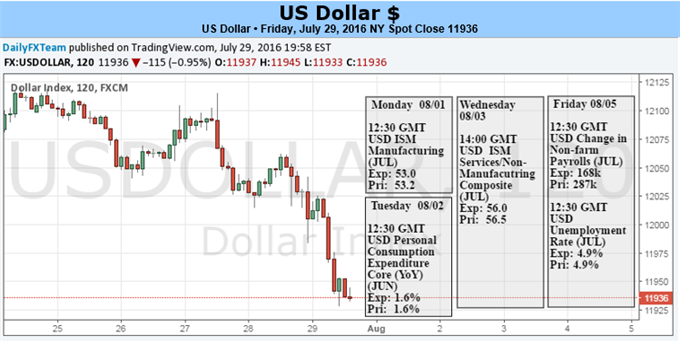 The USDollar dropped every day this past week resulting in a 1.4 percent slide and the longest series of daily losses in 15 months. That said, despite the steady tumble – punctuated by Friday’s sharp drop – the Greenback’s fundamentals still confer it a considerable air of authority. That bearing is not permanent however. Should the appeal of US assets from both growth forecasts and Fed rate speculation continue to fade, the greatest concentration of premium the currency has built up over the past five years could be put at risk. If, at the same time, the apparent stability of the Dollar falter or the market cast off its appetite for safety; the Dollar’s deepest well of untapped strength will dry up. That puts a considerable emphasis this week on global sentiment bearings and NFPs.

Looking back at the USD reaction to this past week’s fundamental sparks, we can gauge where the market’s focus is trained. When the BEA reported the world’s largest economy grew only 1.2 percent in the second quarter (less than half the consensus forecast), it dealt a serious blow to the currency’s and country’s inherent allure. On the surface level, the weak economic figure undermined rate expectations. After the economic update, market-based rate forecasts for a hike in September dropped to 18 percent (from 28 percent the day before) and the probability of a move in December to 36 percent (from 45 percent). While a 25 basis point increase in benchmark yield represents relatively little motivation; in a world of negative rates, it carries significant appeal.

Beyond the ‘frontrunning’ mentality associated to the timing of the next rate cut, deeper damage was done by this GDP reading to the perception of stable and healthy returns on US assets. A moderation of the US economy undermines the perception of stability that further leveraged the appeal of the relatively modest premium in US assets. In other words, if there were a steadfast economic backdrop behind the expensive and low-yielding stocks, corporate debt, etc; the environment looks far less appealing to international investors looking for the proper mix between returns and safety of funds.

This fracture in the Dollar’s appeal does not condemn it to a fundamental and technical free-fall, however, it will raise the stakes in both data and background risk trends. Ahead, the docket will carry two particular rounds of data that can influence rate speculation. The first will be Tuesday’s PCE deflator. The Fed’s-preferred inflation figure, this indicator represents the missing piece to a technical hawkish position by the central bank. Inflation has not added any significant pressure to hike rates, and has in turn allowed for concerns over possible global risks to dictate the central bank’s decisions. Should it remain tepid, it’s easier to take the cautious route. If it picks up, that 2016 hike will look more feasible.

Friday’s NFPs headine the other important round of data in the labor statistics. While this particular leg of the dual mandate is already backing a hawkish view, the market is nevertheless fixated on its release. Economically and strategically (from the Fed’s perspective) speaking, the wages are the most important factor. However, the market is likely to place the emphasis on the NFPs number as the intensity of speculation over rates has increased.

Where rate outlook can represent a considerable gain or loss in near-term premium, the long-term still resides in risk trends. With S&P 500 holding at record highs, it has been a barren period for the currency’s haven appeal. The weak GDP figure only further deflated its appeal. The longer risk appetite is held aloft – a drought for haven appetite – the more progressive the Dollar’s weakness. However, should it falter, the Greenback may finally tap into the motivation to revive the bull trend waylaid last Spring.