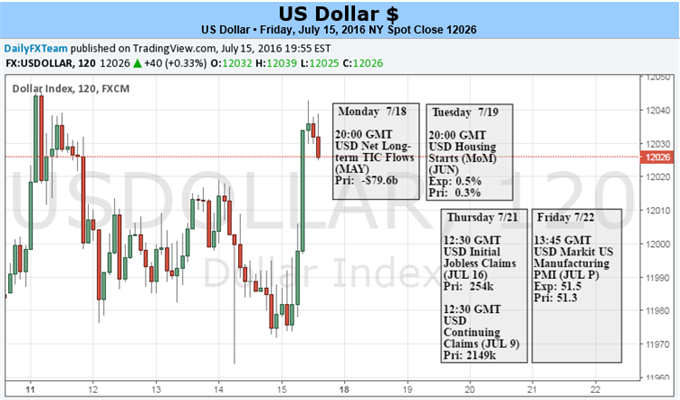 The Dollar has maintained a remarkably tight range for three week range for three weeks running. The 80-point range on USDollar below 12,050 is equivalent to the average daily range of the index on a 20-day rolling basis. That reflects a situation where tight confines clash with major fundamental themes to pose a considerable risk to the quiet that looks increasingly like complacency. In the week ahead, the US docket will thin out (the period following holds the FOMC and 2Q GDP figures) and the pre-Fed meeting blackout will likely turn down Fed rate speculation as a driver. In its place, counter-winds from the strongest monetary policy peers and volatile risk trends will likely take the reins for the Greenback.

Monetary policy has been one of the most productive fundamental themes over the past years, but the straightforward hawkish-dovish to bullish-bearish translation has all-but stalled. For the Fed’s part, their last forecast update from June maintained their belief that they are on pace for two rate hikes in 2016; but the market’s persistent discount was pulled forward through the strong NFPs showing at the beginning of this month. The Fed had an opportunity to project a clear intention – dovish or hawkish – to the market this past week with a range of scheduled speeches amongst its members. Yet, if they intended to offer guidance, the effort certainly failed. A softening of views from the hawks and persistent belief that conditions are reaching desired balance from the doves left the path just as open to speculation.

While there is some US data on the docket moving forward – TIC capital flows, the Chicago Fed’s national activity index and manufacturing PMI – it doesn’t carry the weight necessary to sway rate expectations. If we are to see the Dollar move for its monetary policy standing, we are going to have to find it through the indirect response to its major counterparts. China is a constant and unpredictable peer, but the an uptick in 2Q Chinese GDP this past week and the maintenance of multi-year highs for USD/CNY demands traders keep vigil on their monetary and exchange rate policy announcements.

More predictable are the circumstances surrounding its primary counterparts in the European Central Bank (ECB) and Bank of Japan (BoJ). This past weekend, Japanese Prime Minister Shinzo Abe was delivered a strong backing from the country with an Upper House outcome that significantly bolstered his ruling coalition government. Shortly thereafter, he called for fresh fiscal stimulus while one of his main economic advisors added a monetary policy suggestion to back it. There is no timetable for the announcement of a new fiscal package and the BoJ’s next meeting is July 29; but further easing to draw contrast to the Fed is likely.

In contrast, the ECB is scheduled to deliberate policy on Thursday. Surrounding by a range of important economic data – consumer and investor sentiment surveys, PMIs acting as GDP proxies – the group will have determine the state of their economic trajectory, the financial instability stoked by Brexit and Italy’s banking troubles, and the very real lack of impact that previous efforts have shown in December and March. Monitoring monetary policy moving forward is less about establishing which is more dovish or hawkish and more about its overall diminished effectiveness. Should stimulus fail to fuel the global reach for risk, the resultant risk aversion would benefit the Dollar.

Risk trends are a skewed support for the Dollar. Despite the charge to record high for equities, the Dollar has not lost the bulk of its post-Brexit surge. That is testament to the type of haven the Dollar represents (liquidity and primary reserve) as well as the dubious nature of the relentless and desperate push for yield. If equities falter and pulls other speculative-directed assets with it, however, the Dollar would readily draw the masses to its safe harbor.