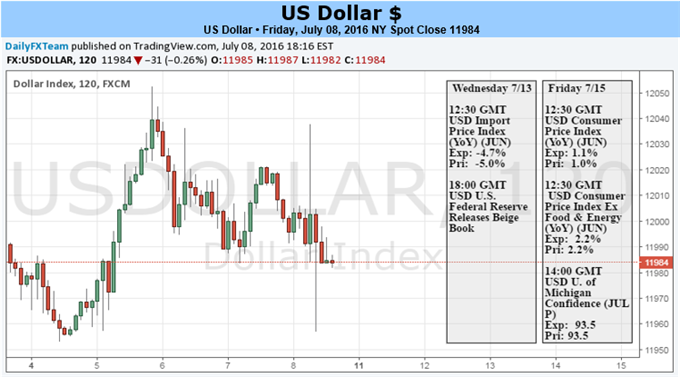 It would seem that the Dollar had strong fundamental fuel to revive its climb this past week, but the currency made little effort to revive its post-Brexit rally. An impressive round of June employment data did little for the Greenback despite the direct connection the markets have traced between the labor statistics and rate expectations. This further highlights a shift in the focus for Dollar traders – and for most currencies and markets – away from rates and towards general investor sentiment. With a loaded docket ahead, we will need to pit the influence of rate speculation against investor speculation.

From a rate perspective, last week’s data was the most encouraging hawks could hope for. The June BLS labor report delivered a strong mix. Reversing the exceptionally weak May figures, the subsequent payrolls grew by 287,000 net jobs which was the largest increase in nine months and the biggest beat versus expectations since November 2009. Looking deeper into the data, the unemployment rate moved up more than expected (to 4.9 from 4.7 percent) but that would come on an uptick in the participation rate to 62.7 percent.

The markets didn’t overlook the encouraging aspects of the data. Rate forecasts improved significantly following the data’s release. The probability for the July meeting was still exceptionally low (8 versus the previous 4 percent probability), but the chances of a move before the end of the year rose to 21 percent chance (from 12 percent). Despite the robustness of the data and the upgrade in forecasts, it is clear that the markets are still not budging on closing the gap with the more hawkish view of the FOMC itself – which calls for two hikes in 2016. Officially, the missing ingredient in the standard ‘dual mandate’ is the inflation element.

In the coming week, we will have the monthly round of price measures the market typically awaits. Among the three, the import and consumer (CPI) readings carry the most weight. In the FOMC minutes released this past week, the group reflected with some degree of surprise that inflation pressures hadn’t risen alongside the rebound in energy prices when the correlation was so robust on the preceding descent. Headline consumer-level inflation has similarly refused to budge and the core figure has even slipped. As long as price pressures are restrained, there won’t be a strong motivation to override their broader concerns – namely global financial risks.

Scheduled event risk offers the opportunity to cover a remarkable set of global risks as well as change the terms of the Fed’s own focus for rate bearings. In its more detailed report this past week, the policy group reiterated a now-common concern in the stability of China’s financial and economic health. This coming Friday, the world’s second largest economy is scheduled to report 2Q GDP. Meanwhile, the Bank of Italy is set to weigh in on its banks and economic outlook (of particular concern for the EU), the Bank of England will deliberate monetary policy following Governor Carney’s post-Brexit warning that easing could be coming and Japanese sentiment take the temperature for one of the world’s most troubled forecasts.

If there is any imbalance in one of these major regions of the world, it is unlikely that emergent pressures on the traditional dual mandate will lead the Fed to potentially-risky rate hikes. On the other hand, if any of these critical areas implode; the implications for global risk trends could prove a boon for the Greenback. The Dollar has seen its position as a safe haven intensify significantly recently with the options for reserve alternatives diminishing post Brexit (brining the second and third most liquid reserve currencies – Euro and Pound – down with it). In the event of a sentiment slide that pulls down equity markets like the S&P 500, the need for safe harbor would revive a dormant appetite for the benchmark.