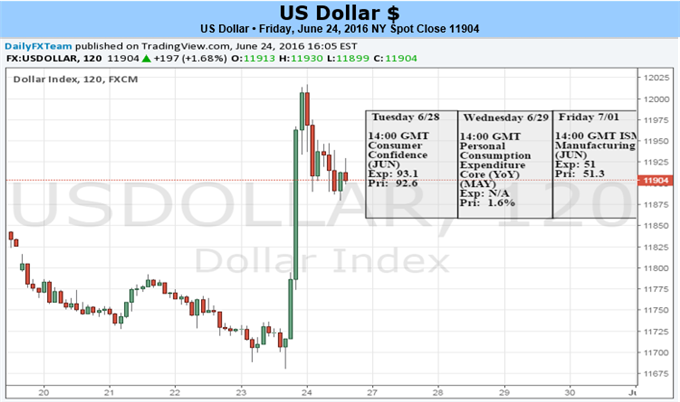 The Dollar soared this past week in the fracas that resulted from the market realizing the United Kingdom had voted to leave the European Union. In fact, the ICE Dollar Index (with more historical data) enjoyed its largest single-day rally since the crisis era back to December 2008 at 2.1 percent. That move is testament to the extraordinary volatility in the FX and broader financial system this past week as well as a clear motivation for safety. Monetary policy as a general market theme has served the Greenback well. However, the divergence of efforts amongst the world’s largest central banks was inevitably constrained which in turn limited the Dollar’s potential. In contrast, the appetite for safety can be a boundless well of strength for the currency.

This past week, the market finally acknowledged its exposure to risk. Similar to the exceptional moves in August and at the turn of the year, there was a systemic move across the world and across asset types that was generated from sentiment. However, unlike the previous flashes of panic, there are deeper roots to this tumult. China’s financial troubles and recognition of tighter monetary policy (contributions to the previous moves) are important, but they come with inherent curbs. Policy authorities in the world’s second largest economy have remarkable control over its economy and markets while their intentions for distortion are kept in check by their desire to cement their position in the global economy. Dependency on monetary policy is a deep vein but skepticism can (and has) hold strong in the face of uncertainty. An event like the Brexit is dramatic and progresses too many threats to carry limited engagement.

With the UK’s historic vote, we have the immediate volatility which was universal and severe. The Pound suffered a record daily loss, the VIX volatility index posted its fourth largest daily increase in history and Europe’s Euro Stoxx 50 equity index posted a record drop of its own. This reflects the kind of extreme aversion to ‘risk’ that sends global investors to absolute havens like US Treasuries and the Dollar. A mere flash-in-the-pan type of move would not benefit the USD long-term. Yet, there is more profound fundamental threat to this event than a quick flight to temporary shelter. This represents a clear protectionist move in a world that has only seen passing threats of a shift towards domestic focus at the detriment of global strength. A growing concern over global growth, the crumbling of the Euro-area, recognition of limited policy capabilities and growing investor pessimism could make for a more permanent risk aversion.

A solidified fear has a lot of excessive risk exposure built up over the years that can act as fuel for deleveraging. However, there may be another component to a long-term Dollar appeal: reserve status. With the split between the UK and EU, capital will temporarily flee the former for economic concerns and more permanently the latter as its Economic stability is called into question. When we consider the hierarchy of global reserves (see the second chart below); there is a troubling lack of options for safe guarding capital. The Euro is the second most used reserve (19.9%) and the Pound the third (4.9%). The Yen is an alternative, but a poor one given its manipulation risks and size (4.1%). There is only one true alternative for scale and stability, and that is the Dollar (64%). This is likely to prove a long-term boon for the Dollar especially as alternatives like the Yuan are viewed as fraught and manipulated.

Moving forward, the ‘risk’ aspect of the Dollar’s fundamental appeal is likely to grow while the ‘return’ quality will diminish. There is little yield to be made in the market generally, and the exaggerated emphasis on a 25bp hike from the FOMC versus the diminished efficacy of stimulus programs from the likes of the ECB and BoJ was losing traction regardless. With the global risks more prominent and the greater risk of a slowing of world growth, a rate hike in 2016 is even less likely. Fed Chair Yellen will weigh in next week. Perhaps the greater pressure would come from central bank intervention, but that is likely to have as limited influence as monetary policy. 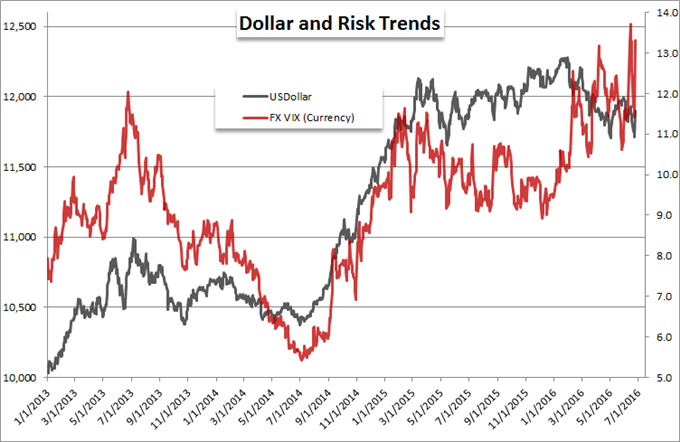 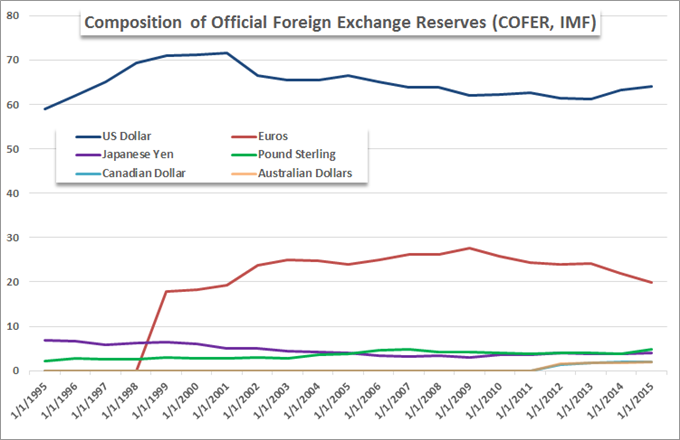