USDollar an Anti-Brexit Haven  For Better or Worse 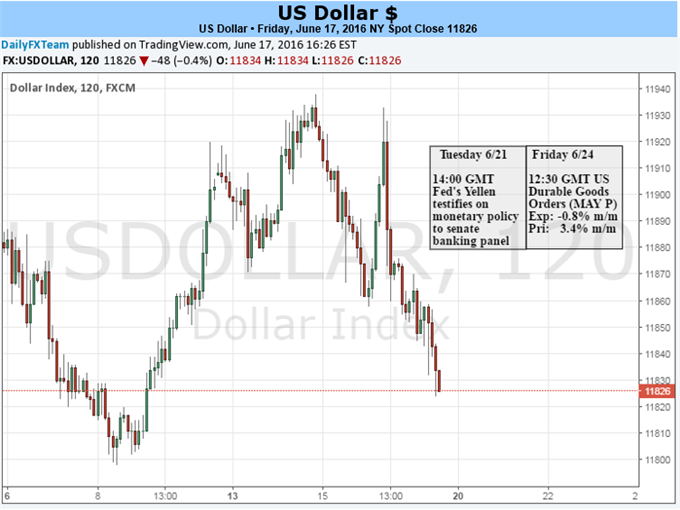 The Dollar usually exacts its influence over the rest of the FX market by virtue of its size. That isn’t the case for the week ahead. The Greenback will take its cues from the Pound and UK event risk. The ‘Brexit’ vote’s direct impact on the US economy is relatively small, but global conditions are such that such a prominent event can ignite systemic risk. In that context, the Dollar stands ready to revert to the extreme safe haven that it has played at the most dire times over the past decades. Ultimately, US monetary policy, growth and financial health have direct lines to this top tier event risk. Therefore Dollar traders should be prepared for potentially dramatic volatility later in the week and reserved but erratic activity in the lead up through the first half.

Looking back to last week’s top event risk – the FOMC rate decision – we could see that the focus was turning to the critical vote in the United Kingdom as much from officials’ perspective as from the market’s. The central bank retained its median rate forecast for two hikes through 2016, but the outlook for pace materially cooled. There were far fewer forecasts for the second hike this year, and the projected rate through 2017 and 2018 was lowered (by 25 and 50 basis points respectively). Growth and employment forecasts were little changed and inflation projections actually rose. The fluid factor was the ‘global economic and financial developments’ that the group said it was monitoring closely in the statement. Chair Janet Yellen later reiterated their concern about Brexit specifically in her press conference.

This focus sets up an interesting focal point and set of scenarios. First and foremost, the implications for global volatility will find the Dollar playing the role of safe haven currency – for better or worse. The USDollar has maintained a relatively strong positive correlation with FX-based volatility. Currency market volatility (measured by my own aggregate implied index) is at a four-and-a-half year high thanks in large part to the divergent and yet competitive monetary policy paths the world’s largest central banks have pursued. Yet, despite these elevated asset-specific activity levels; we have not seen a full financial market seizure in some time.

In the event of a Brexit (whereby the UK votes to leave the European Union), the economic implications for the rest of the world will be trumped by the financial response to a dramatic global protectionist move. Over the three to four years, there has been an increasing in maneuvering to pull back from open global trade and to create a local economic advantage at the expense of economic partners. This has turned into competitive currency devaluation, pressure on trade deal as the lifeline of growth for many critical pillars of growth and other points of tension. In a world of exceptionally low returns and overpriced risk exposure, such a development can certainly unnerve.

For the Dollar, a panicked reaction to a Brexit could prove a boon. When seeking out the most durable of markets, capital moves into Treasuries and US money markets without debating the merits of yield, economic appeal or even portfolio concentration. The higher global volatility measures, the more motivated the move to the Dollar will be. Alternatively, if the Referendumends with a ‘Remain’ win, there will likely be some risk premium behind the Dollar as a tail risk hedge that will in turn be unwound. That said, a side effect of tempered international risks could also shore up Fed rate expectations. These would be conflicting forces.

Unfortunately, the top US-centric event risk in the week ahead is scheduled prior to the expected rendering of the Brexit results. Ms. Yellen is due to testify before the House and Senate on monetary policy Tuesday and Wednesday. She will be in the same position of wait-and-see as the rest of the market. Had her inquisition come after the event were resolved, she could have given more definitive bearing for speculators on Fed forecasts in response. – JK