Will Yellen Step in to Stem Dollar’s Tumble as June Hike Vanishes? 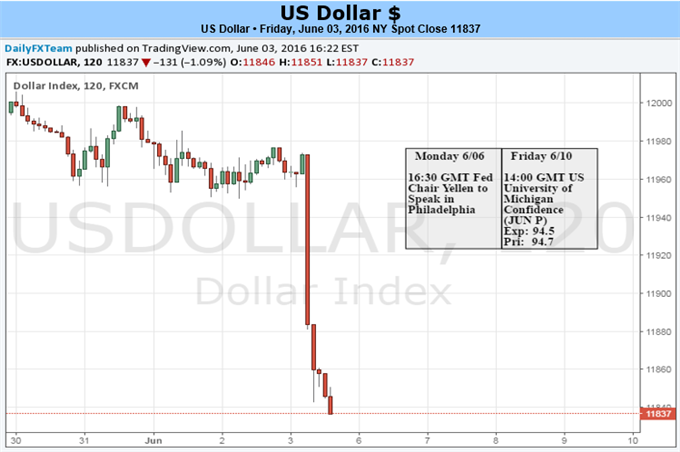 There are two scenarios for the week ahead: either the market fully acknowledges that the Fed is hamstrung and cannot hike or Chairwoman Janet Yellen spurs a dramatic Dollar rally. Either way, the world’s most liquid currency is facing a clear call on conviction and trend. This ultimatum is the result of this past Friday’s May nonfarm payrolls. A dramatic miss in payrolls captured the market’s focus and overrode the accomplishments of the underlying trend of labor market improvement over the past years. Speculators determine what is important in the market and they may also dictate the moves of the central bank.

Looking back at the entirety of the past month’s labor data, the circumstances were certainly not dire. Aside from the bombastic net payrolls figure; the unemployment rate dropped 0.3 percentage points to the lowest level in over 8 years and wage growth held buoyant at 2.5 percent. A downtick in the participation rate doesn’t hit the qualitative assessment, but it is the jobs figures that does it all on its own. The 38,000 jobs added to the economy was the fewest since August 2011 when there was no net change. Perhaps more shocking, compared to the consensus forecast, that was nearly the biggest disappointment (slightly smaller than December 2013) since the height of the financial crisis back in late 2008.

To a market that was only begrudgingly relenting on its deep Fed skepticism over the past four weeks, this data only revived the scope for doubt. In the span of a day, the probability of a rate hike on June 15 dropped from 22 percent to 4 percent. The outlook for July fell from 46 to 28 percent. From their view, it is certain considering the cautious tone of the Fed speak and the constant downgrades in their own forecasts. However, the Fed’s communications plan did attempt – albeit, clearly inefficiently – to prepare the market for certain data disappointments. At various outlets, both individuals and the group noted they were prepared for breaks from pace and even market corrections for which their convictions would not waver. Yet, the Fed is also committed to preventing volatility and not setting in motion a Rube Goldberg machine that simply ushers in the next crisis.

Whether we look to Fed Fund futures, swaps, Treasury yields or the Dollar; they all reflect a market that believes the quarterly FOMC meeting only a little more than a week away will end with no change to policy. If the Fed were to disregard the market’s beliefs and hike, the surprise and scramble to reposition would cause destructive volatility which could snowball into the trigger for a major risk aversion move that has been bidding its time and perhaps even further stumble into a financial crisis born of divergent monetary policy that amplifies volatility while spurring further protectionism.

Chairwoman Yellen’s speech Monday is the last opportunity to realign the market to a probability of a near-term hike. She is the only person – and event – with the authority to change market sentiment. After that, the Fed’s blackout of media silence pre-FOMC starts Wednesday. She not likely to refute skepticism of a June hike. However, if she doesn’t offer perspective to line up a July possibility, the Dollar will certainly have further premium to bleed.

Outside of the Fed speculation, the docket carries a few indicators of economic heft like consumer sentiment, wealth and credit. These are not likely to tap deeper veins. Globally, a range of developed and developing (emerging market) economy rate decisions are due. That will give the Dollar perspective. However, for serious currents, USD traders should maintain a weathered eye on risk trend benchmarks like the S&P 500. If risk aversion kicks in, the dynamics change from a pursuit of tepid yield to a need forsafety.