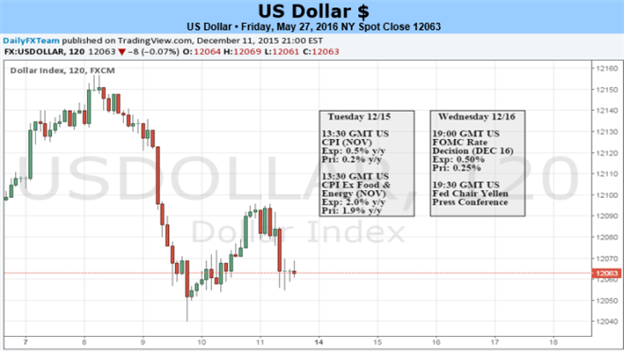 The Dollar spent much of the past week consolidating following a three-week advance, but Yellen’s remarks Friday spurred a rally that put the bulls back on the front foot. We will open the new trading week with the USDollar at a two months high but liquidity curtailed by Monday’s Memorial Day holiday. While a temporary curb on participation, many may see this as a cue to a much longer drought for volatility and liquidity with the ‘Summer lull’. June is historically a quiet month, but there are many key events in the week ahead and systemic threats throughout the month that are likely to see the markets deviate from the complacency many have come to depend on.

Among the primary fundamental motivators for the Dollar, rate expectations are once again retrenching their influence over the currency. The seemingly impenetrable doubt that the Fed would be on hold with monetary policy throughout 2016 has significantly thawed. Much of the commentary from the central bank members hasn’t changed materially. There has been a notable step back of concern over global pressures, but there is little change in the conviction in a policy bearing. Yet, the market is clearly more responsive to the constant reiteration that the group expects two hikes this year and that June is a ‘live’ meeting. Fed Chair Janet Yellen’s remarks reinforced this market sensitivity. Her remark that a hike in the coming months ‘may be appropriate’ spurred the Dollar’s late-in-the-week rally.

With the focus back on the Dollar’s monetary policy advantage, the top docket items ahead may take on a greater degree of influence. The bulk of the financial media focus will once again be on the Friday labor report. The headline writers are familiar with the NFPs and will build up the excitement. As has been the case for some time, the critical elements of the report will not be in the net payrolls or unemployment rate. While they can certainly stoke volatility, their trends of improvement would take time to reverse. Instead, a monetary policy-oriented market will once again focus on the wages element to garner the qualitative and inflation-orientation that has be mapped out as the missing piece. Speaking of inflation, the Fed’s favored price gauge – the PCE – is due Tuesday. A recent slump in headline and core figures is likely to shift with energy prices in particular rising 19.8 percent through April.

Taking the market’s temperature on rate speculation, Fed Funds futures are pricing in a 30 percent probability of a hike on June 15 and 54 percent chance of a move at the July 27 meeting. Clearly, there is still plenty of room for the Dollar to build rate premium. However moving from a thaw in skepticism to full-blown confidence in a hike is a leap that will likely require a significant upgrade in fundamental sponsorship. That means, a sharp increase in the inflation measure and overwhelming improvement in the employment statistics.

Liquidity will be another hurdle that a sustained Dollar advance would need to overcome. The holiday Monday will disrupt speculative pressure only temporarily as the docket and levels are significant in the days that follow. Yet, the concern of inactivity is broader with the assumption of a Summer lull setting in at its regularly appointed time. Meaningful fundamental impetus is needed to force critical technical Dollar breaks and forge follow through on an already impressive trend. Quiet is not a foregone conclusion – in fact is unlikely. Not only will Fed debate of a hike carry global repercussions; but we will see broad waves with the Brexit, oil prices, monetary policy accommodation failing to prop growth (ECB, BoJ), China capital flight and a host of other issues threaten to swell in the foreseeable future.

If the event that markets remain steadfast, it would map the ideal conditions for the Fed to hike under. In contrast, tumult could trigger crack the seemingly fragile stability the market is attempting to hold together. In a waveof risk aversion and desperate reaction from many other countries, the US and Dollar may look even more attractive even if the rate speculation dried up. - JK