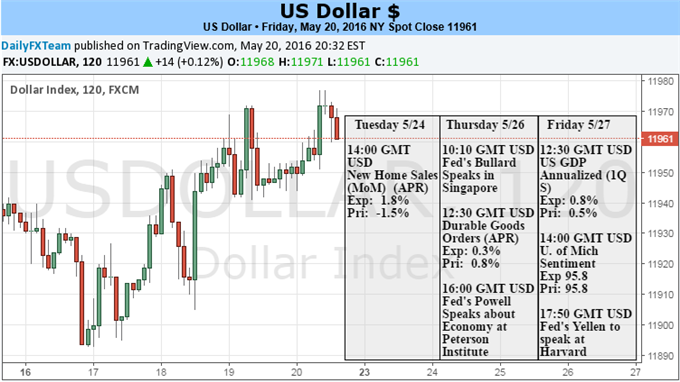 The Dollar is finding some serious reprieve from a painful three months of selling pressure. Over the past three weeks, the currency has advanced between 0.8 and 5.0 percent (versus the British Pound and Australian Dollar respectively). Rather than finding its motivation in external sources like thematic risk trends or strong crosswinds from motivated counterparts, the advance is proving innate. The FOMC minutes this past week finally cracked the speculative rank’s skepticism over the potential for 2016 rate hikes. However, that revival of credibility also opens the door to greater sensitivity to another run of charged Fed-speak in the week ahead. Will the leverage in volatility be worth the market’s acquiescence?

While a 28 percent probability of a FOMC rate hike on June 15 – the next scheduled FOMC minute complete with forecasts and Chairwoman press conference – may not seem profound, compared to the rigid incredulity of follow-up 2016 rate hikes in the wake of the December ‘liftoff’ is remarkable. Only a week ago (May 13), the market was pricing a scant 4 percent probability of a move at the next meeting. A chance of a full 25 basis point hike through the end of the year was only 53 percent on the same day. That had significantly undermined one of the Dollar’s most profound fundamental drivers over the past four three-plus years.

It is worth looking back at the minutes this past week to see why they had such a profound impact. Qualitatively, the view the group took was not materially more optimistic or aggressive than previous meetings. Sure, the absence of ‘global’ pressures was welcome, but the emphasis of ‘two-to-three hikes in 2016’ – as SF Fed President John Williams stated – has been the standard language among the group. Recognizing the persistence of the market’s discount to their own view, the Fed realized the need to deliver a greater sense of certitude that a hike could be on the agenda or risk a shock of volatility to the system when tightening did come around – which would invariably make their job far more difficult and likely force an immediate course reversal. The heavy inference of a ‘June’ move and balance of confidence in reduced negative risks provided the crucial push.

With the break in skepticism, we don’t have an unchallenged Dollar climb ahead of us – the choppy progress of the past week verified as much. However, it does open the market to greater sensitivity to tangible changes in the data and policy group rhetoric moving forward. For data, the listings are light. New homes sales and PMI figures are the most holistic measures for central banks to chew on – and they do not touch upon the critical areas of policy decisions (global risks and oil prices rather than general full employment and broad inflation). The abundance of Fed rhetoric scheduled ahead, however, will compensate nicely.

There are 9, officially-scheduled speeches on the docket through the coming week, and some of their content will be particularly palatable to rate speculators. St. Louis Fed President Bullard will speak about policy normalization on Monday, Minneapolis Fed President Kashkari (to this point vague on policy standing) will discuss energy and monetary policy Wednesday, and Fed Chair Yellen is set to speak on Friday. Expect rate forecasts to swing on key words – hawkish and dovish – while the Dollar follows along.

And, as always, a cautious eye needs to be kept on the influence of non-scheduled themes moving forward. Global speculative appetite in particular is of great consequence to the entire financial system and the Dollar as a safe-haven-of-last-resort. Volatility measures for most assets are low, but it is building in FX. What’s more, the sense of calm this should provide is not present. Rather, we see the opportunistic and anxious proclivities of a market that recognizes an end to easy times is drawing near.