What was once a straightforward interpretation of monetary policy’s impact on exchange rates and capital markets is now a source of confusion and abject volatility. The Dollar will be right in the center of this fundamental storm in the week ahead with the Federal Reserve’s monetary policy meeting on tap. This is not only an event where the central bank will determine whether or not to hold the benchmark rate, but it is also the quarterly event with updated forecasts and Chair Yellen’s press conference. In other words, it will be difficult not to stir the markets. That said, following the surprising market reactions to the ECB’s and BoJ’s most recent efforts to escalate their accommodative policies; the speculative rank will have to establish what a dovish or hawkish outcome means for the Dollar and for financial market sentiment.

Looking at the particulars of this week’s top event, the Federal Open Market Committee’s (FOMC) policy meeting will conclude Wednesday at 18:00 GMT (the US will enter daylight savings time this weekend). According to overnight swaps, the probability of a hike at this meeting is essentially zero – though, traders shouldn’t write off the possibility of a surprise. The monetary policy statement will carry less significance because its subtlety will be overridden by the unambiguous forecasts.

All facets of the central bank’s outlook are important in the economic sense, but they are not all equally market moving. Forecasts for employment trends will be quickly brushed over as the trend of improvement is well established and can stand moderation. Inflation and GDP projections will carry more weight as we see the group’s views for the more contentious objectives for monetary policy. Cutting to the heart of the matter though will be the interest rate forecasts themselves (called the ‘Dot Plot’). As of the December forecast, the outlook was for 100 basis points worth of hikes through December 2016 (bringing the range to 1.25 – 1.50 percent), 200 bps higher than today by the end of 2017 and just under 300 bps of higher by the close of 2018. That’s ambitious given recent circumstances.

The practicality of tightening this year according to those forecasts makes it unlikely. There are seven FOMC meetings left this year - including the March 16 event. The group has made it explicitly clear – both collectively and amongst its individuals – that they will move gradually, which would suggests keeping to 25 bp moves and no consecutive increases. To hike four times this year (at 25 bps each), they would have to hike at this meeting and move every other gathering with a final hike in December to meet that goal. That is doubtful. Growth has slowed, the group has turned the spotlight back on international concerns, inflation is rising but slow to pick up momentum and the language amongst officials has taken a more neutral/dovish tone. A downgrade is therefore likely.

Even if we were certain of a downgrade in the pace for hikes this year, it is not clear how the market would respond. The Dollar has dropped ahead of the important meeting deflating some of the hawkish premium, but there is still considerable bullish interest behind the currency considering it a mild pace would still be a severe contrast to its counterparts. Furthermore, we have seen a shift in how the market responds to further drive to the dovish extreme of the policy spectrum. The BoJ adopted negative rates and saw the markets flip against the traditional ‘dovish move equates to bullish capital market, bearish currency’ equation within 24 hours. The ECB’s stimulus bomb this past week broke the function instantly. The market response will likely be a settling of confused speculative interpretations. 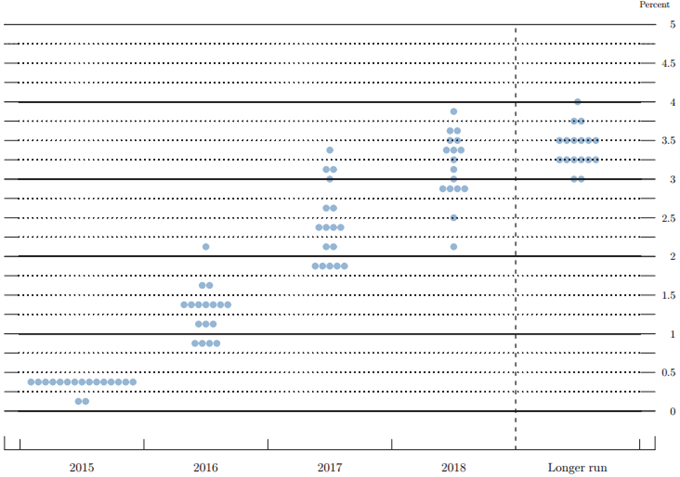