The Dollar tumbled this past week as a tempered view for Fed rate hikes rendered the currency incapable of taking advantage of the improved sentiment across global markets. Up until the central bank’s December liftoff, the Greenback maintained a positive risk orientation. In other words, when market participants were seeking trades with higher return or would otherwise climb when confidence was on the rise; the Dollar advanced on the back of its first-mover for interest rates. That ‘hawkish’ view has deflated significantly through 2016, but is the retreat permanent? Will the USD be buffeted by fundamental cross winds from the ECB rate decision or Chinese National Peoples’ Congress (NPC) while awaiting the March 16 FOMC decision?

To get a sense of the market’s view of the Dollar moving forward, it is worthwhile to refer to both the technical and fundamental picture. Technically, the Dow Jones FXCM Dollar Index (ticker = USDollar) has pulled back to its 200-day moving average and the floor of a persistent but gradual rising trend channel tracing back 10 months. Fundamentally, traders are holding their breath for an event that is due the following week to clarify the currency’s position in the ranks for return - and possibly spur risk trends. Both present a sense of magnetism to keep the market in line and a deferment of conviction.

However, speculation rarely abides convention. While we may be counting the days down to the Federal Reserve’s ‘quarterly’ policy decision whereby forecast updates and press conference will be served up, we have seen remarkable volatility in the market’s outlook for the rate path. Over the past two weeks, rate forecasts climbed from levels that showed complete skepticism of any further hikes from the central bank through the coming year to a level reflecting one, 25-basis point hike (both in Fed Funds futures and overnight swaps).

The thawing in rate expectations translated into little traction for the currency however. In fact, the Dollar fell against all of its counterparts – including the Euro and Japanese Yen which are both under the influence of major stimulus programs and experimental, negative interest rates. This may reflect a curbed value afforded to what amounts to the timing of small changes in virtually zero rates. A higher resting rate of volatility and uncertainty in the market can certainly do that. Yet, relative monetary policy is comparative. Compared to negative rates in other major liquid currencies, value will start to rebound. The question is whether risk winds hold and/or the technical boundaries stand the tide before we reach the conclusion on March 16.

In the meantime, there will always be fundamental currents to change the market environment around the Dollar. If volatility readings for the various asset classes climb through the coming week, the risk-reward balance will skew and the Dollar may be drug down by its yield focus (it will take a much more significant push to safety to trigger the currency’s haven appeal). It is also possible that a strengthening or weakening of key counterparts can leverage USD movement indirectly. The Yuan (offshore, CNH) may not be market-derived, but China is the world’s second largest economy; and the NPC can present significant changes in forecast for the country. More threatening is the ECB rate decision Thursday which has touted considerable speculation of either a fresh upgrade to stimulus – via QE or negative rates – at this meeting or clear intentions for a move at a subsequent meeting. 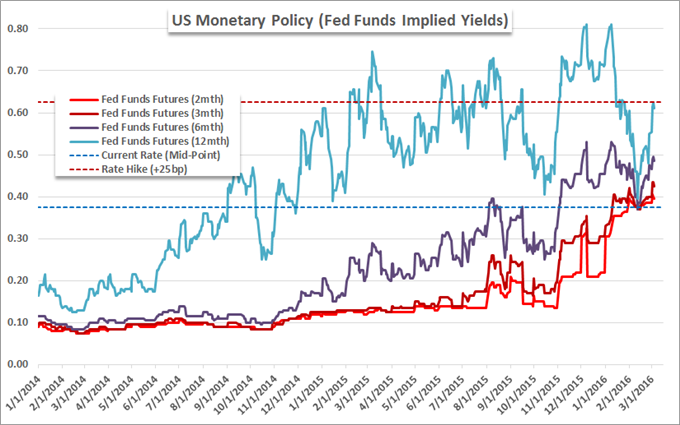