Dollar Gains as Market Chews Rate Expectations with NFPs Ahead

This past week’s USDollar rally marked the currency’s best performance since November’s dramatic break to 12-year highs – a move that proved a quick exhaustion. The bullish drive that we will start the new week will draw in the speculators but it will nevertheless still struggle to drive momentum. After years of appreciation, the Greenback is stretched to the point where fundamentals lift needs to be more explicit. Risk trends may stir moving forward in the wake of the G20, but it is still a reach to hit the extreme necessary to stoke its liquidity appeal. Instead, progress will likely come through the slowly thawing Fed rate forecasts and through the absorption of its counterparts’ losses.

Looking at the fundamental backdrop to the Dollar’s progress over years, the most prominent source of strength has been the divergent monetary policy between the Fed and its peers. While global rates are essentially at zero and not offer meaningful carry for some time, the capital flows that build with changing policy bearings – particular among the top reserve currencies – can be substantial. Yet, over the past year, that obvious disparity was discounted and the hawkish forecast for the Fed was slowly cut down by the speculative ranks. Doubt gained so much traction that as of two weeks ago, the market was pricing in no chance of a follow up rate hike to the December ‘liftoff’ in 2016. That entrenched skepticism started to break up this past week however.

We see through both asset prices and instruments meant to hedge policy changes a clear thawing in the near certainty of a bound Federal Reserve. Looking at overnight swaps, the chance of a second 25 basis point rate hike over the coming 12 months rose to 50 percent – where only a week ago it was negative (and in fact flirting with the possibility of a cut). From Fed Fund futures, the chance of a hike is starting to pick through again as well. While it is not fully priced through the end of the year, we can see the slow pick up of the ‘curve’ in forecasting.

A rate hike still looks like an unlikely event in the market’s eyes, but we have to remember how this is valued. Currency pricing is relative, so even the loose prospect of a step to tighten policy – which lifts returns and/or reduces fiat supply if you want to look at it that way. That is tremendous contrast to central banks that have recently dove into negative rates or are threatening to upgrade their QE programs to further flood the market with their currency. In this way, the Dollar gains at its counterparts’ malaise. And, if the G20 maintains its nebulous vow to bolster growth without a tangible path to accomplish said goal; the Dollar will be placed in even greater relief as it could be interpreted by a cynical market that policy is running out of room and will have to keep hope in depressing monetary policy.

Among the key event risk to watch in the week ahead is the February NFPs due on Friday. I give the greatest deference to the wage component for its inflation implications, but the data is generally capable rate fodder. Fed speakers, the Beige Book and data such as the ISM PMIs will carry limited speculative range. Off the US docket, China GDP speculation will direct global growth views, Euro-area CPI will indicate whether the ECB goes for a QE upgrade and Brexit fears will hang over the Pound’s head. 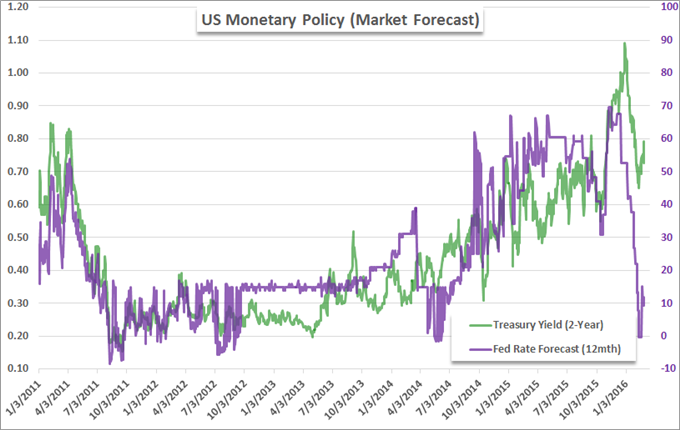