This week is when the rubber meets the road after months – years, even – of qualified remarks, convoluted press conferences, and opaque policy statements: the Federal Reserve will finallyget on with it and raise its benchmark interest for the first time in nearly a decade. Historically, the Fed finds itself raising rates at a time when the labor market/inflation dynamic is just supportive enough to allow for policy tightening. Yet conditions today are relatively weaker than when the Fed raised rates last in June 2006: 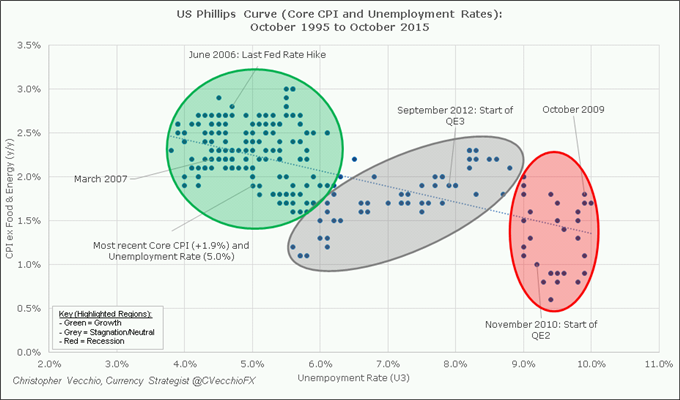 When the Fed raised rates last in June 2006, the Unemployment Rate was 4.6% and Core CPI was +2.6% y/y. The most recent Core CPI (+1.9% y/y) and Unemployment Rate (5.0%) readings suggest that this is a softer environment to hike rates in that in past cycles. The recognition of this reality is the cornerstone of our belief that, despite the US Dollar having been supported by higher US yields and thus rising rate expectations in 2015, the path is anything but clear going forward after the Fed’s meeting on December 16.

Much like the European Central Bank’s decision to cut its deposit rate on December which subsequently produced a Euro rally, it’s more than likely that the upcoming Fed rate hike has been priced into the US Dollar, leaving open the possibility of disappointment. In fact, the process of the rate hike being priced into markets has been the backbone of the US Dollar rally over the past three months: 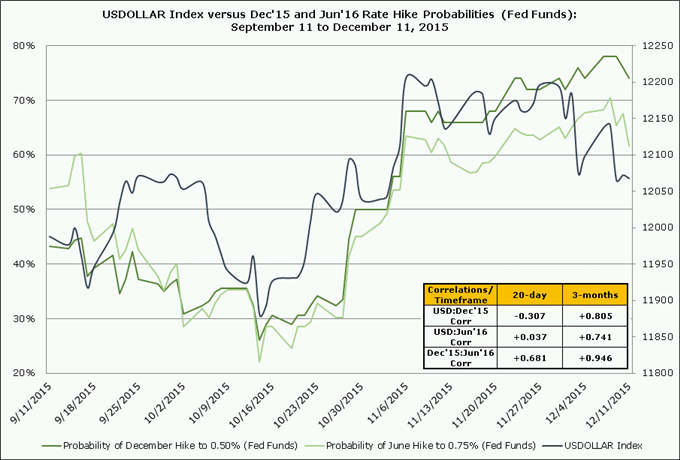 While rising US yields over the past year have been supportive of a stronger US Dollar, a simple look at short-term interest rate differentials between the US and Germany, for example, doesn’t tell the whole story. Given the soft backdrop the Fed is looking to hike rates in – data ex-labor (the three-month NFP trend is at +218K while the twelve-month NFP trend is at +220K, its lowest rate since August 2014) is soft - it seems likely that the prospect of higher short-term rates is reducing longer-term growth potential: 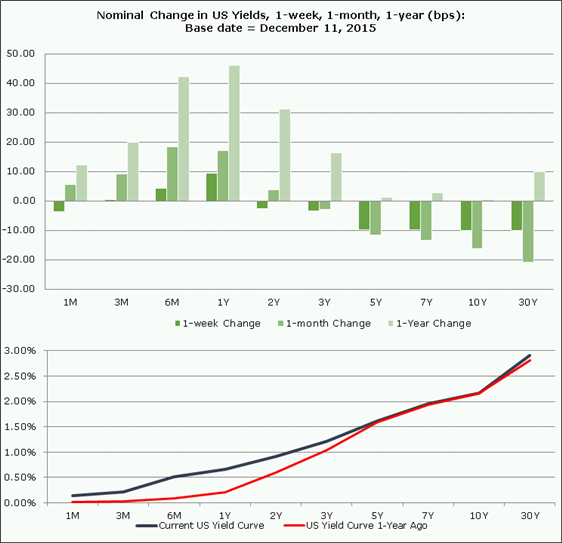 Over the past year, the biggest increases in nominal yields occurred at the short-end of the yield curve, mainly in the 6M to 2Y timeframe, indeed reflecting the prospect of an imminent Fed rate hike. In theory, this should have increased yields at the long-end too; instead, the market feels that the US growth picture is less clear. The flattening yield curve is foreboding: each recession in the post-war era has been pre-dated by the yield curve flattening before inverting. Growth prospects for 2016 (and beyond) in the face of a Fed tightening cycle aren’t looking so hot, according to the bond market.

Knowing that rising US yields have helped the US Dollar over the past year, then they will be instrumental in determining the US Dollar’s direction henceforth. Yields don’t need to retreat for the US Dollar to stop rallying; they can simply maintain their current spreads versus their sovereign counterparts and it will be a difficult environment to see further US Dollar gains. Regardless, it seems very likely that the Fed is going to do everything that it can to temper expectations for a fast tightening cycle. At each meeting in 2015 featuring updated Staff Economic Projections – which this meeting will feature - lowered expectations for the path of future rates.

In just the past three meetings alone, we’ve seen the Fed start to lower expectations for the future policy path. For example, in the March 2015 Staff Economic Projections, the FOMC was looking at 1.875% as the year-end rate for 2016; by the September meeting, this forecast was lowered to 1.375% - one rate cut fewer than previously anticipated.

This implies that there will be four to five rate hikes next year after a December 2015 rate hike – or one hike every other meeting in 2016. This seems very unlikely. Another downgrade to these expected future rates would very much be consistent with what the FOMC has done in the past few months; the median expectation for 2016 should settle somewhere between 1.25% to 1.50%. Softer expectations vis-à-vis a lower glide path could undermine what’s been the key catalyst for the US Dollar’s strength the past several weeks: rising yields and interest rate differentials.

Forward guidance is very much back on the table, and while the Fed is likely to reduce its glide path, it’s not going to want to suggest to the market that this is a ‘one and done’ rate hike either. The Fed is shifting full gear into its ‘data dependent’ mindset. We can surmise that the Fed is unlikely to employ an aggressive strategy (as chart 1 shows, by historical standards, the current labor market/inflation dynamic is in the ‘low-end’ of the “growth” zone), and fitting in with their previous pattern of behavior, we would expect the Fed to exhibit this by reducing the glide path of its future interest rates. As the market has displayed in recent months (see chart 2 above), the pricing of the second rate hike – from 0.50% to 0.75% - has been nearly as influencial on the USDOLLAR Index as the pricing of the first rate hike which should occur this week. What the Fed does on Wednesday is important, but what the Fed says about 2016 is even more important for the US Dollar. –CV