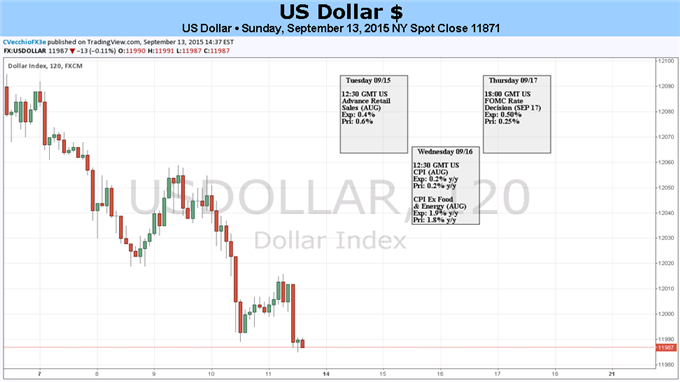 US Dollar May Find This Week's FOMC Meeting Disappointing

- The retail crowd’s recent jump into long USD positions bodes poorly for the US Dollar.

- Traders will be hard to find opportunities this week that won’t be impacted by the FOMC meeting.

- Have a bullish (or bearish) bias on the US Dollar, but don’t know which pair to use? Use a US Dollar currency basket.

In the week ahead of arguably the most important FOMC meeting of 2015, the US Dollar suffered against all but one of its major counterparts. USDJPY was the lone outperformer, up +1.33%, as traders found reason to dump safe haven assets and return to higher yielding FX (AUDUSD was up by +2.66%): the recent bout of financial market volatility as it pertains to China may just be enough to prevent the Federal Reserve from moving interest rates on September 17.

The Fed is in a bit of a paradoxical situation right now, as it goes with recent developments in financial markets. When looking at the Fed’s dual mandate – to foster stable prices and maximum employment – it’s evident that one-side of the mandate has been met. The labor market has been quite strong in recent months, with the unemployment rate dipping to 5.1% in August, below the FOMC’s June projection for the 2015 unemployment rate to hold around 5.2% to 5.3%.

As a result of the labor market improving, financial markets have become upset by the notion that the Fed could raise rates this week. Short-term US yields have spiked, provoking investors to abandon short-term long equity positions while lifting the US Dollar. Similarly, markets abroad have become spooked by the idea of the Fed raising rates against a backdrop of slowing global growth, causing an unwind of carry trade positions in HY and EM currencies. Over the past weeks months, these factors have fed into capital flows supporting a stronger US Dollar.

Now, as a result of their efforts at transparency and forward guidance, with financial markets around the world reeling from the notion of the Fed beginning a policy tightening cycle, the Fed may be forced to backtrack on its desire to move away from ZIRP.

In an early-September interview with The Wall Street Journal, San Francisco Fed president John Williams, known for his centrist views as well as having views similar to those of Janet Yellen, suggested that the Fed would like to raise rates this year and will probably do so, with a caveat: if markets risks calmed down. They have not in the interim period since his comments (not even a week old), and it seems highly unlikely that there will be material improvements in the global economy in the few days this week before the Fed meets.

Throw in the fact that the Fed is still well-short of the inflation half of its dual mandate (Core PCE inflation is only +1.2% y/y, below the +1.3% to +1.4% y/y range the FOMC projections suggested in June), and the headwinds are indeed stacked against the Fed raising rates. Market participants have more or less priced out the possibility of a September rate hike, with the Fed funds futures contract implied probability showing a 28% chance of a rate rise on Thursday.

Taking into these factors into account, the Fed (realistically) has one of two options this week, and neither bode well for the US Dollar. Indeed, given the rise in risks in financial markets, and ensuing capital inflows to the US Dollar from HY and EM FX, the US Dollar seems susceptible to disappoint. The first option would be for the Fed to raise rates, and announce that it would not do so again until its inflation half of the dual mandate is met. FX markets continually discount future policy actions, and an indication that the Fed wouldn’t be looking to raise rates any time soon would undermine the US Dollar.

The other option would be for the Fed to not raise rates at this meeting, and at the moment, markets are pricing in December as the most likely period for the first rate rise (per the Fed funds futures contract). A meeting that unfolded in this manner would conjure memories of the March FOMC meeting, in which the US Dollar depreciated sharply after the Fed bluffed the beginning of its normalization process.

In both cases, the thrust behind the US Dollar’s potential decline post-FOMC comes from diminished expectations for future policy action. One such place to look for evidence of this will be the Fed’s dot plots, in which Fed members indicate where they believe the main rate will be at various points in time. At the June meeting, the 2015 and 2016 rate forecasts were revised lower to 0.57% and 1.75% respectively, from 0.77% and 2.03%, respectively, in March. The June forecasts implied one or two rate hikes in 2015; the decision to do a “one and done” hike or delay it to the October or December meetings will further lower the projected rate path; reduced rate expectations will hurt the US Dollar. –CV