Dollar Drops Alongside Stocks but Haven Bid Can Come Roaring Back 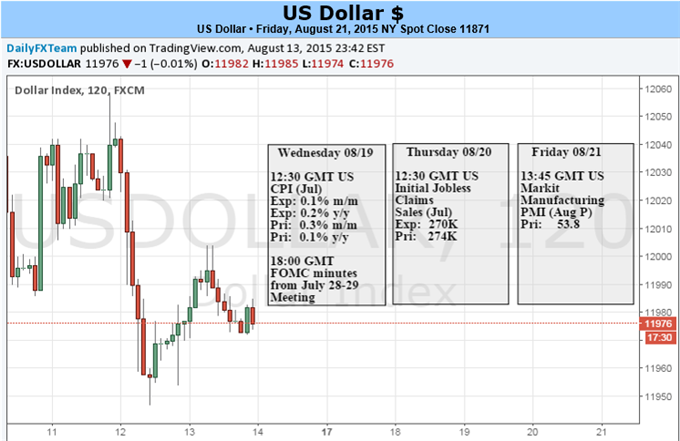 The S&P 500 closed its biggest one-week sell off in four years. That’s what makes the Dollar’s biggest retreat in nine-weeks over the same period so remarkable. Isn’t the US Dollar the world’s most renowned reserve currency, liquidity store and safe haven? Shouldn’t it rally at the first hint of fear? Before we presume that all ties to regular speculative interests have been severed, we should consider the unusual conditions that have led to our current predicament. Sure, the Dollar faces an initial stumble for its initial climb on favorable rate forecasts. But should risk aversion intensify and/or the Fed stay its course, the currency’s bid will return with a vengeance.

In the past six years, we have seen the global financial system recover from one of the most intense global crises on recent record. However, from recovery and the return of sidelined capital, conditions evolved into speculative desperation and excessive exposure beginning around the start of 2013 – when the Fed activated the open-ended QE3 program and S&P 500’s climb grew unnaturally consistent. As the assumption of risk shifted to central banks’ balance sheets, an appetite for returns confronted an exceptionally low return through normal investment channels. To make competitive returns, market participants had to employ leverage, seek riskier exposure and reduce hedging.

The US Dollar wasn’t immune to this unusual market dynamic. Over the past year, the currency enjoyed a remarkable run that was founded on similar circumstances to the likes of the S&P 500. The Dollar climbed sharply because the Fed was pulling back from accommodative monetary policy and was closing in on its first rate hike well before its peers. So, while the US yield was essentially set at zero, the anticipation of the first hike drew speculative funds in – front running the Fed as they had with Treasuries before the massive QE efforts. With risk aversion, this ‘anticipatory carry trade’ appeal comes under pressure. However, the deleveraging that would be done on this exposure is likely to dry up quickly.

From the more extreme scenario, an intensified sense of risk aversion would continue to loosen long-Dollar exposure that was simply looking to take advantage of carry. Yet, as fear turns to panic amongst speculators, the repatriation of foreign funds to ‘square up’ will be swamped with funds flowing into the US financial system seeking the safety of Treasuries, money markets and the Dollar itself.

Though it isn’t necessarily dependent on sentiment leveling out, a retrenchment in rate expectations would do better to pull speculative funds back to the Dollar if there isn’t a broad flight from all carry. Despite stumbles in data and a gradual turn in markets, the Fed and many of its key voters have notably kept their conviction on a return to tightening. Bullard this past Friday was just the most recent. A commitment to hike despite a market tumble would likely further feed a risk selloff and leverage the Dollar’s haven appeal. -JK