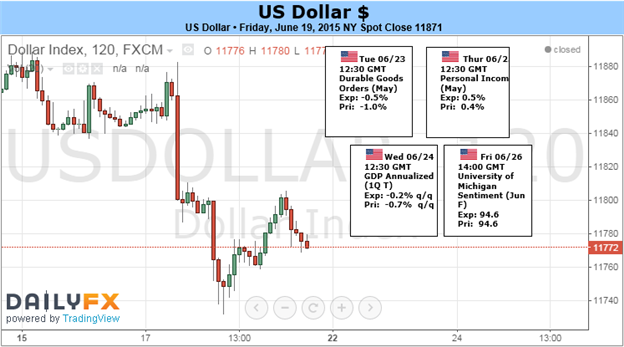 While there may be a lot of volatility for the Dollar moving forward, the medium-term fundamentals carry a positive slant whether general market conditions improve or deteriorate. If the US and global economies move to a more stable and productive state, there is little to throw the Fed off its hawkish bearing for monetary policy – a view that the market still seems to be discounting. If the clouds darken and the financial system starts to seize under the threat of a China-led speculative crush or a Greece-borne European crisis, the Dollar stands ready to accept haven flows. This is a unique position to be in and should keep traders focused.

If the ‘status quo’ of market complacency continues through the forthcoming weeks, the general FX focus is likely to shift back to the theme that has commanded the market for the past year – relative interest rate expectations. Considerable advantage has been conferred to the Greenback for the unique hawkish bearing of the Federal Reserve, but the premium of being a first-mover towards higher yields is not likely fully priced in.

In the short-term, the market is still pricing a significantly divergent view of the liftoff date for the first rate hike from what the central bank itself has projected. Further out, the pace of subsequent tightening (the curve) diverges even further. In the FOMC meeting this past week – which included updated forecasts and press conference – we found a few elements that spoke to the dovish. In particular, the fact that the vote to hold policy was unanimous suggests the most hawkish aren’t willing to start the ball rolling on the more difficult conversations at subsequent meetings.

Yet, a uniform wait-and-see vote doesn’t offset the clearly hawkish views laid out in the forecasts. In the interest rate projections, the Committee is projected two, 25 basis point rate hikes before the end of the year. That is a significant contrast to Fed Fund futures which show the market is pricing in the first move out in January 2016. Given that there are only four more meetings this year and the Fed is unlikely to move back-to-back, the first hike would likely come latest in September if their views hold. Beyond that first move, the curve maintains a hearty premium to the market’s own view through 2016 and 2017.

In the week ahead, the rate forecast will be messaged by the Fed’s favorite inflation gauge: the PCE deflator. It doesn’t need to present a dramatic reading, merely evidence that the slump in volatile components (energy and food) is rolling off.

Rate forecasts will be the natural theme that we return to so long as something more dramatic doesn’t present itself going forward. And really, only one theme has proven itself capable of overriding: risk trends. Risk appetite remains buoyant, but conviction is all but absent. A resolution to Greece and/or stimulus from China to halt the Shanghai’s plunge are possible. However, the true risk is deleveraging finally starting. In that open shift towards safety, the Dollar would surge. -JK