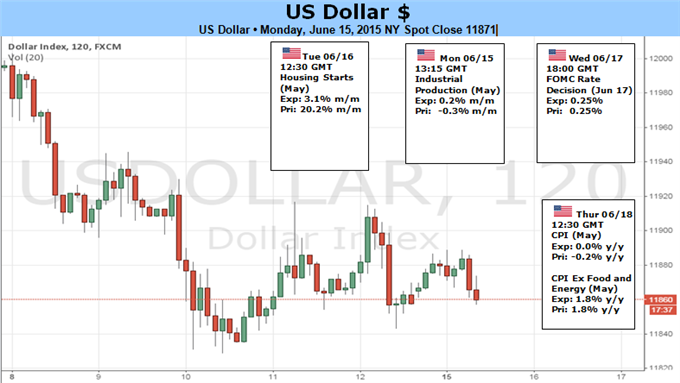 US Dollar Up or Down? That’s the Question Next Week May Answer

The US Dollar fell across the board in a relatively quiet week of forex trading, but a highly-anticipated US Federal Open Market Committee (FOMC) meeting in the week ahead promises big moves in USD pairs.

All eyes turn to the much-discussed June FOMC interest rate decision to determine direction in the US currency, and indeed a jump in FX volatility prices underlines the weight of expectations for the US central bank. It seems exceedingly unlikely that the Fed raises rates on Wednesday; a Bloomberg News survey shows that only 1 of 74 economists polled believe the FOMC will move on rates. Yet they will issue new forecasts and the so-called “Dots”—staff projections on the future of the Fed Funds rate— which are likely to force considerable volatility across financial markets and the US Dollar itself.

A recent wave of positive US economic data should have arguably forced the Dollar higher given strongly positive surprises in US labor market results and Retail Sales growth numbers for the month of May. The fact that the Greenback instead traded towards key lows versus major counterparts suggests that traders viewed this as insufficient to boost the currency’s overall standing. It’s nonetheless worth noting that US employment data in particular lifted expectations for the future of US Federal Reserve interest rate hikes. But whether or not Fed officials show any meaningful change in rhetoric may ultimately decide near-term direction in the US currency.

We will pay especially close attention to whether the Fed makes real adjustments to staff projections on the Fed Funds rate, and it may be similarly significant to listen to the post-meeting press conference with Fed Chair Janet Yellen. Economists and most investors expect that the FOMC will finally raise interest rates at their September policy meeting. Officials are exceedingly unlikely to commit to this timeline, but we will get a sense of where FOMC members predict interest rates will finish the year.

The US Dollar continues to benefit from expectations that the US central bank will be the most aggressive of any major central bank in raising rates, but such a benefit could easily become a detriment if there’s a material downgrade in expectations. Indeed, recent market indecision underlines the US Dollar’s vulnerability to any disappointments.

It’s shaping up to be a potentially pivotal week for the US currency. From a technical perspective, we see the Dow Jones FXCM Dollar Index is in search of clear direction. With any luck, the highly-anticipated Fed announcement may be just enough to force a major market move. -DR