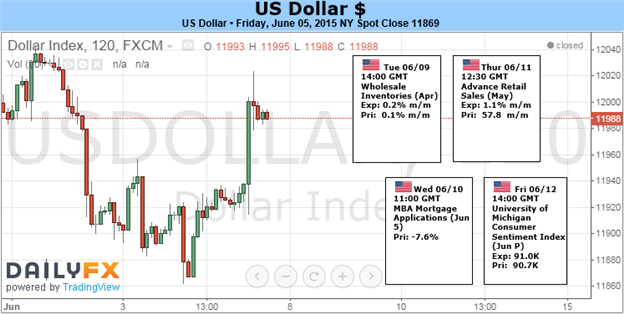 There is little denying that the US labor market report this past week fed rate speculation. The May payrolls beat expectations, the unemployment rate – though ticking up – is still near a multi-year low and even wage growth is building on inflation projections. Yet, none of these updates materially changes the speculative tone that has developed around the heavily contested FOMC ‘liftoff’ time frame. A further wave of event risk in the week ahead will continue to shape the debate between the hawks that now seem to favor a September move by the central bank and the doves certain of a hold until 2016. However, it will be tough to develop true conviction knowing that the Federal Reserve’s June meeting is scheduled for the following week and can abruptly change the stakes.

Taking stock of the fundamental updates this past week, there were a number of headlines that seem to solidify a rate hike in 2015 (well before most other major central banks). Data generally supported an undercurrent of growth and perhaps even some inflation pressure. Meanwhile, Fed rhetoric once again carried a common thread of confidence and deliberate warning that tightening is likely to start this year – data warranting. The communications campaign in particular has been a remarkable development for those that have tracked it week-to-week. It appears a concerted strategy to acclimate the market to the notion that rates will tighten in the proximate future.

However, an uptick in core PCE, 5.5 percent unemployment rate and musings of a rise from the zero bound by Bullard doesn’t seem to have swayed positioning. Fed Fund futures refuse to budge from pricing a January first rate hike and 2-year Treasury yields are not significantly outpacing other Government debt benchmarks (like Germany’s) with the same maturity. There remains plenty of room to doubt the central bank’s tempo in forecasts for a solid economic rebound from the 1Q slump. Where many officials have suggested a 2015 hike is still likely, nearly everyone agrees the decision will be ‘data dependent’.

Looking at the docket over the coming week for cues and milestones, we have plenty of big ticket items. The problem is that they may not hit the correct pitch. On the consumer front, we have the aggregate Labor Market Conditions report for May (Monday), retail sales and first quarter household wealth (Wednesday), as well as the University of Michigan Consumer Confidence report to close us out (Friday). Inflation figures will also be represented between import (Thursday) and factory inflation indicators (Friday). The week end sentiment report will also offer up inflation expectations figures. This falls short of the top-tier measures likely necessary to redefine our trend.

The problem is not the importance of the data on hand. Had these same indicators crossed the wires over the past week, they would have likely contributed significantly to volatility. The issue is rather the buzzing anticipation of the FOMC meeting on June 17. With a definitive policy meeting – with statement, updated forecasts and Chairwoman Yellen’s press conference – due the following week, it would be highly speculative and risky to settle on a decisive view and lasting position.

To continue lifting the Dollar back to 12-year highs set in April, there needs to be a certain degree of conviction. To carry the market beyond that threshold requires near certainty amongst the speculative ranks. We may have to wait until the Fed delivers its views before we find the market is prepared to commit itself to such a run…or further capitulate on its long-term advance.