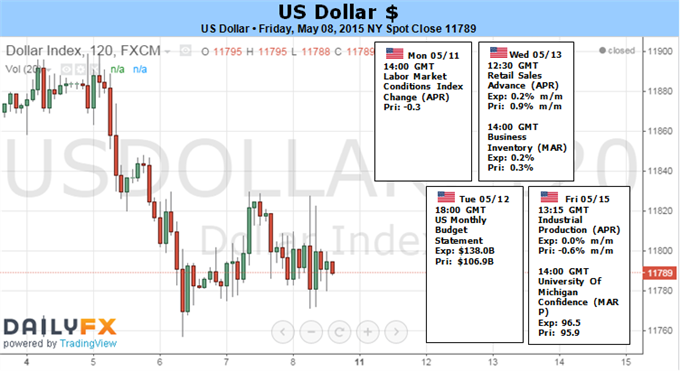 The USDollar (Dow Jones FXCM Dollar Index) closed lower for the fourth consecutive week – the longest series of losses for the currency since last June before the currency’s epic bull run kicked off. However, the despite the stumble, the currency has not marked the next stage of its correction, much less the momentum one would expect with a true trend reversal. There are long-term and high-level fundamental pillars keeping the Dollar from fully capitulating. Yet, a comparative advantage on monetary policy forecasts, economic strength and an untapped haven appeal doesn’t make the currency immune to interim bouts of selling. Looking ahead to next week, internal factors will likely take a back seat to the tumultuous themes in the global financial system.

While most speculative traders tend to focus on near-term flashes of volatility and the immediate swings in price they generate, the bigger picture fundamental trends dictate momentum and convictions. In the Dollar’s current retreat, it is worth considering the more prolific themes that steer not just this currency but the market as a whole. Monetary policy divergences in particular have been a critical source of market motivation the past five years. That is unlikely to change moving forward unless there is a systemic deleveraging (‘risk aversion’) event – though that would definitively benefit Dollar. That being said, whether the current debate over whether the FOMC will first hike in September (hawkish) or January of next year (dovish); the Greenback will be relatively hawkish to those currencies backed by active stimulus programs or tangible threats of future rate cuts.

In the evaluation of trend versus ‘correction’, the Dollar has a strong bullish foundation. A further pullback, though, is possible and may even be likely depending on the next wave of event risk. We have passed two weeks of important data, and the benchmark has conspicuously held back selling pressure. This past week’s employment report kept the general trend of the declining jobless rate intact (offsetting lacking wage growth), previously the tepid GDP showing was labeled ‘transitory’, and the Fed meeting did not deviate from its communications march towards the first hike. The restraint from the bears is remarkable.

Looking for clarity for the Fed’s timeframe in the week ahead looks unlikely. There are a few upstream inflation measures, the TIC capital flows numbers and University of Michigan consumer sentiment survey (which also offers up inflation expectations). From the central bank’s ranks, there are few scheduled speeches. From Fed Funds futures, we find the product still reflects a January launch date. However, FOMC member remarks this past week and a Reuters Primary Dealer poll sported the September meeting (June and July seem to be off the table).

For interim volatility, the Dollar will likely have to source its motivation from outside its own fundamental boarders. In particular, strong currents from its most liquid counterparts may prove the most capable catalyst for movement. The Euro – the USD’s primary counterpart – is facing a tumultuous economic calendar. The key ‘known’ event risk is the GDP data crossing the wires. The Eurozone and ‘core’ economy figures are due Wednesday while Greece’s report is conspicuously pushed back to Friday. Greece itself will be an incessant risk to the shared currency. Euro area finance minister meetings, IMF payments and ECB reviews of collateral haircuts for liquidity access will present a day-by-day risk.

And, as is always the case in these dubiously stoic markets, traders should remain wary of systemic risk trends. A financial cleanse grows more likely with each week. When the fire does light, the Dollar will stand ready to take all bids.