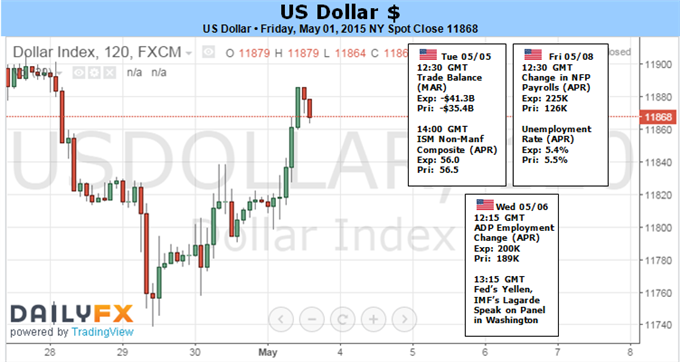 This past week, the USDollar posted its first drop on a monthly basis in 10 consecutive months. At the same time, the week ended on a rally that closed out the period little changed. We are in a phase of technical and fundamental limbo. A correction for the Greenback is not without its merits: the Dollar’s exceptionally consistent run can be overinflated by trend-following speculative interests that need to retrench and rate speculation has softened alongside the quality in data. Then again, the currency’s and economy’s ‘relative’ appeal is still exceptionally strong. With the Dollar transitioning from a steady bull trend to a period of consolidation and now suffering its most painful slide in a year, the burden to generate momentum on this week’s fundamental themes will be more evenly distributed.

For fundamental traders, the most recognizable catalyst in the week ahead will be the April labor statistics due on Friday. It is not unreasonable to peg the NFPs the week’s top event risk. It is an easy-to-interpret indicator and taps directly into what has driven the Dollar and FX market generally through the past year: monetary policy expectations. However, there will be hurdles to overcome for this data to lock in a definitive currency move. The most prominent obstacle for the report will be its Friday release. There will be plenty of anticipation, but confirmation comes late in the week.

In the data itself, the elements that cut closest to the key determinants for monetary policy will carry the most weight. The unemployment rate is already well beyond levels previously set as targets, so its up- or downtick will generate lower amplitude waves. The missing element in the timing of the Fed’s liftoff is tangible inflation pressure. For that reason, the earnings data will likely prove the most important update. The current consensus is for a 2.3 percent increase in wages year-over-year, which would match the strongest pace since 2009. Should the data meet or ‘beat’ this forecast, it would tip the uneasy equilibrium in rate speculation that we were left with following this past week’s poor 1Q GDP reading and the FOMC’s suspiciously status quo statement. Alternatively, a ‘miss’ is likely to carry less weight as it fighting a current whereby the Fed remains well ahead of the policy curve.

Over the months, we have seen the influence of the payrolls data itself diminish as the market focuses on the ‘qualitative’ elements of the statistics (guidance given by Fed officials). However, given the persistent deterioration of US data recently – the Bloomberg US Economic Surprise measure hit a six-year low this past week – this headline may stir deeper emotion. A weak showing can reinforce the Fed Funds futures (the ‘market’) timing for a January 2016 first hike. Alternatively, a better reading can resuscitate the hawkish forecast.

Outside of the US docket, it will be important to keep track of external factors that can cause cross fundamental winds for the Dollar. The Euro, Pound and Australian Dollar may in particular encourage response for the currency. The Euro surged this past week (2.9 percent versus the USD) as optimism for a Greek deal struck a speculative nerve. The upcoming UK election has driven anxiety surrounding the Pound to its highest levels since the Scottish Referendum. And, the RBA is expected to deliver a rate cut Tuesday. Depending on how these events play out, the Greenback can play the foil to substantial volatility.

Finally, it is always wise to keep tabs on the general quality of risk trends. Though the correlation to equities, volatility levels and other traditional measures of ‘risk’ have waned; they would be quickly restored by a jolt of concerted panic or greed that shot through the market. A purge of speculative excess is necessary for the capital markets. It is just a matter of time and motivation. When the unwind occurs, capital will seek the security of US liquidity and regulations.