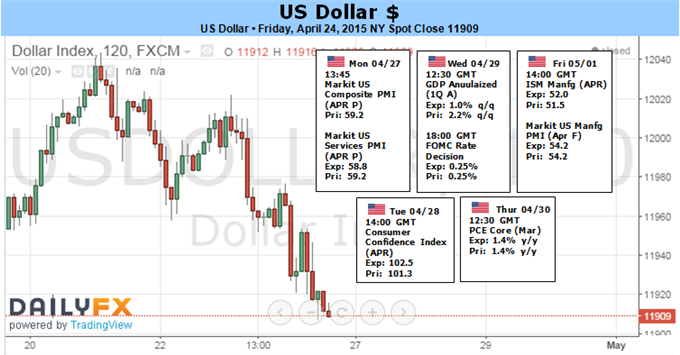 Dollar Ready to Reverse Should FOMC, GDP Give its Consent

The stage is set and the curtain is rising. The Dollar has wobbled these past weeks, but it hasn’t managed to turn its nine-month long bull trend. That is difficult to do when the undercurrent of the FX market maintains solid support for the benchmark currency. Economic potential, monetary policy course and disaster insurance premium all bolster the Greenback’s case for a medium-to-long term climb. Yet, that doesn’t render the currency infallible. Speculative appetite – as it has in equities and other asset classes – has likely overreached on the Dollar. But, what would unnerve such a comfortable trade? Heavy event risk.

There is a lot going on in the financial markets over the coming week. Subsequently, there will be a lot of crosswinds working on the consensus view for the Dollar. That said, we will likely see the market discount the influence of many of these catalysts in deference for the concentrated event risk on Wednesday: 1Q US GDP and the FOMC rate decision. Over the past year, one theme has commanded the reins of the broader FX market – divergent monetary policy views. The Fed has shifted from the world’s most accommodative central bank to one of the first majors to contemplate a rate hike. What has resulted from this shift is one of the most impressive runs the currency market has seen in a while.

The trouble for the Dollar is that the premium afforded the currency is so-far unrealized. While there is general agreement that the Fed will lift rates over the coming year, there is considerable debate as to when the actual move will be realized. At the turn of the year, speculation for a ‘mid-2015’ move was robust with meaningful support for a June or July liftoff. However, in the past three months, the hawkish mood has soured. Data has softened and fallen increasingly short of forecasts (the Citigroup Economic Surprise Index dropped to a three-and-a-half year low). Rhetoric from central bank officials in turn has also backed off a campaign to acclimatize speculators to an earlier move. Maintaining a measure of skepticism throughout, the market has pushed back its timing of a first move through Fed Funds futures from September (at the start of the year) to January 2016 currently.

Whether or not the central bank will be forced to sit on its hands will be heavily dictated by the fundamental duo Wednesday. Chronologically, the growth report for the opening quarter of the year crosses the wires first. The forecast is already calling for a significant moderation of the economy’s pace from 2.2 percent in 4Q to a more reserved 1.0 percent clip. While many – including some Fed members – believe this could be a repeat of last year where the lull is temporary, it would likely kill any lingering hope for a June move.

As for the central bank decision, this is not one of the quarterly events where we receive updated forecasts and a press conference to work our speculative assessments off of. That said, the statement will be thoroughly processed and that is where the market derived most of its interest at the last meeting. If the group’s tone is materially more cautious or concerned on the state of the economy, inflation and global conditions, it could further dovish skepticism. Of course, the most potent outcome for the Dollar would be a combined economic slowdown and softer rhetoric.

Ultimately, the Dollar’s immediate risk is that it has gorged on speculative appetite in the persistent trend alongside the tangible yield advantage. That places the currency in a position to bleed off some of its excess as the uncommitted trend-runners bail. If the cumulative US economic docket comes out better than expected, the potential impact will be materially diminished to a disappointment – an asymmetrical influence. And, while it is important to watch the key US updates as it commands global attention; Dollar traders should also keep tabs on Euro-area/Greek tensions, general risk trends and the myriad of monetary policy-sensitive events for the other majors.