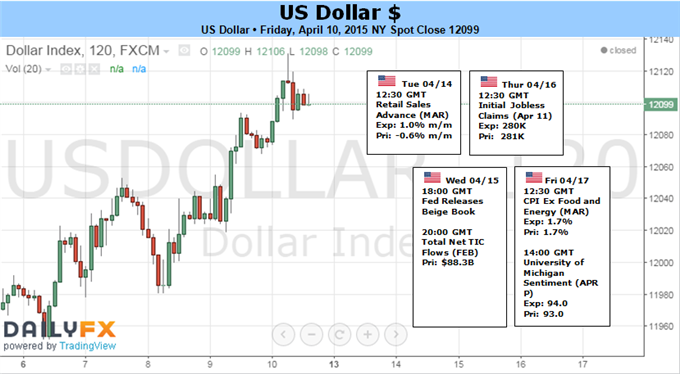 US Dollar Remains Strong, but for How Much Longer?

The US Dollar finished the week near decade-plus highs versus the Euro as it rallied against nearly all G10 counterparts. A noteworthy gain in US Treasury Yields helped explain much of the Dollar’s rally, but heavily stretched positioning and price momentum makes further gains relatively unlikely.

Global interest rate differentials remain the main driver of major currency moves, and expectations of US Federal Reserve interest rate hikes have pushed the US Dollar to impressive peaks. The US Federal Reserve is in fact the only G10 central bank expected to raise interest rates in the coming 12 months, and as long as this remains the case we expect the US currency to hold its gains against lower-yielding counterparts. Yet there remains clear uncertainty surrounding the Fed’s moves. Further Dollar strength is far from guaranteed.

Traders will look to the coming week’s US Retail Sales and Consumer Price Index inflation data for the next clues on the Federal Reserve’s interest rate policy, and major surprises could force important US Dollar volatility. Analysts predict the Advance Retail Sales report will show that consumer spending grew by 1.0 percent March—the first month-over-month gain in three months and the fastest pace of expansion in exactly a year. Lofty expectations leave ample room for disappointment and the odds seem stacked against the US Dollar ahead of the event.

Late-week CPI inflation figures represent the biggest risk to the Greenback given their clear implications for the future of US Federal Reserve monetary policy. Headline CPI data is expected to show prices remained exactly unchanged in the 12 months through March, while CPI excluding food and energy will likely match February’s pace at 1.7 percent. Topside surprises could increase the Fed’s sense of urgency in raising interest rates and normalizing monetary policy.

Recent FOMC minutes showed a surprising level of support for raising interest rates at the highly-anticipated June meeting, and the jump in yields helped drive renewed Dollar strength. Yet rhetoric is one thing and actions an entirely different matter. Interest rate futures show a miniscule 7 percent chance that the Fed will hike in June—hardly encouraging for US Dollar bulls.

Patience may wear thin for those holding USD-long positions rather quickly; recent CFTC Commitment of Traders data showed large speculators were their most net-long US Dollar versus the Euro (short EUR/USD) on record. And though this in itself does not signal that the currency is likely to reverse, it does imply that there may be relatively few traders left to sell. The key question is simple: will interest rate expectations be enough to fuel further Dollar gains? It’s entirely possible, but we’ll keep a close eye on upcoming data given clear risks of an important USD reversal.