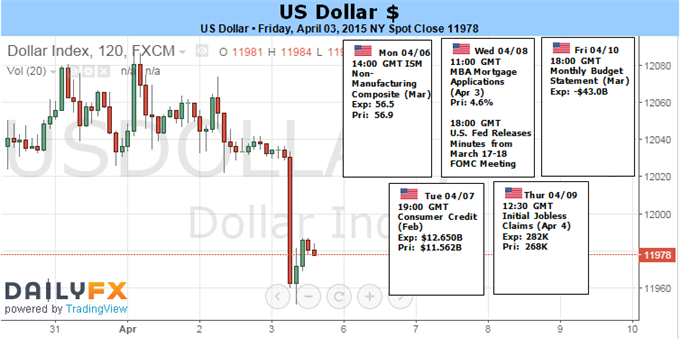 There is little doubt that the US Dollar maintains a fundamental advantage over most of its counterparts. However, that doesn’t make the currency immune to periodic speculative rebalancing. Following a record, nine consecutive months of advance (by the ICE Dollar Index’s and EURUSD’s ccount); the currency has stumbled for three straight weeks. Consolidation itself wouldn’t pose a serious concern as periods of respite are common as larger trends unfold. Yet, the market’s speculative appetite for the curency’s run may have over-reached the more modest fundamental means. With the market’s interest in FOMC timing intensified and the broader market pulling back on over-leveraged positions, the Greenback is at increased risk of a meaningful correction.

If we were to rank the fundamental themes that have proven the most influential for establishing direction and feeding momentum in the currency market, relative monetary policy would lead the pack by a wide margin. With the Fed closing the tap on its QE efforts – now just reinvesting capital from maturing assets – and weighing a time frame for a first rate hike, the Dollar is heading in the opposite direction to some of its most liquid counterparts. Whether the eventual rate hike is June, September or December; the US central bank remains on course to tighten where most others are easing. That said, throttling back on the hawkish march may still require the bullish crowd to pull back on their exposure.

This past week, the economic docket delivered the perfect mix of labor data to mirror a view of a Dollar supported by an underlying trend but perhaps stretched by speculation. In the Bureau of Labor Statistics’ March report, the principal statistics supported the trend of improvement these past years. The unemployment rate held at its 7-year low 5.5 percent and wage growth firmed modestly to a 2.1 percent clip. Yet, the statistic that stands out was the 126,000-payroll figure that was nearly half the forecast. While a miss – even of that magnitude – will not change the fundamental trend of employment, it does temper its tempo.

Given a heightened sensitivity to the timing of the first rate hike after the FOMC withdrew its verbal buffer on discussing the shift (the market associated the term ‘patient’ as a 3 month freeze on tightening), this miss has not gone unnoticed. While the Dollar dropped in wake of the news, the critical levels (the USDollar’s trend channel, 1.1000 for EURUSD, 1.5000 for GBPUSD, etc) still stood. Holiday liquidity conditions likely contributed to that hold, but the unfavorable turn will not be forgotten over the weekend. When the speculative pool fills back out next week, investors will reevaluate their valuation for the Greenback.

When weighing the Dollar’s fundamental advantage, we should consider the surveys and assets that establish expectations. The FOMC did lower their year-end forecast for interest rates last month, but that outlook still stood at a premium to the market’s expectations. After the NFPs release, the December Fed Fund futures contract (an instrument used to hedge interest rate changes) dropped to its lowest closing basis in the contract’s life – and tipping the market’s confidence below a certainty that at least once hike will be realized in 2015. At the same time, two-year Tresaury yields dropped 11.7 percent.

It is difficult to establish at what level the Dollar’s rally has over-reached its fair value as the Fed’s timetable contrasts its ECB and BoJ peers so definitively. However, there are speculative measures that may offer scale to the market’s appetite to exploit a consistent trend rather than follow due diligence on fundamental value. We have seen the US Dollar’s net speculative futures positions measured by the CFTC’s COT report soar these past 9 months. Having seen the Greenback position level out and some major counterparts (like Yen and Aussie dollar) rebound, we are seeing early stages of rebalancing. This is not unique to the Dollar nor just the FX market. Speculative excess is seen in most markets; and if deleveraging takes traction, the Dollar could suffer as well…until we hit panic levels.