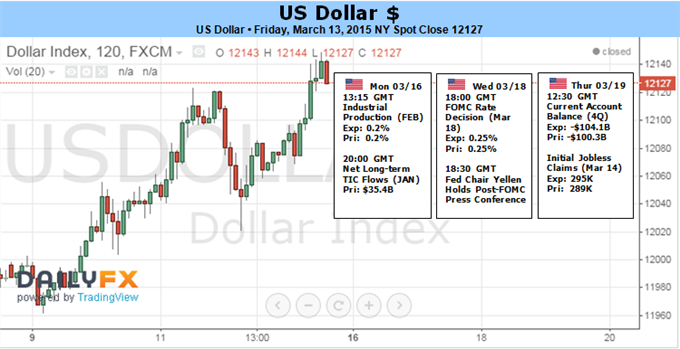 The day of reckoning is almost upon us. This Wednesday, the Federal Open Market Committee (FOMC) will deliver its forecasts for economic trends and interest rates. These projections are neither promises for action nor a commitment to a rigid time frame. In isolation, they may not have much sway over the Dollar or capital markets. However, context is everything. For the past six-years, stimulus has been a ubiquitous feature of the market and many believe the backbone to the exceptional exposure the markets have taken on. There is certainly big picture influence in this event. Then again, it also possess a short-term volatility risk – particularly for the Dollar – as a recent surge in speculative anxiety has focused the world’s attention.

There are eight FOMC policy meetings a year and those that fall on the standard quarters come with updated forecasts from the Committee’s members as well as a press conference from the Chairperson. The March 18 meeting falls on the quarter and will deliver updated predictions for employment, inflation and interest rates along with a closely dissected statement. There are a few things to watch in this particular event. For the focus the media has shaped, the top concern will be with the use of the word ‘patience’.

Given that a central bank cannot commit to policy ahead of time – data could change between their vow and the time of action – the market looks to interpret their intentions through carefully crafted remarks. Language was important for assessing the lead up to QE2 and QE3, the end of QE3 and now the shift towards the first rate hike. After the central bank capped its open-ended stimulus program, the emphasis was placed on the suggestion that rates would be held at an “exceptionally low” level for an “extended period”. Through off-handed central bank remarks, the inclusion of this phraseology in a statement was interpreted to mean the benchmark would be held near zero for at least another six months. This was abandoned at the end of last year.

Now, the focus is on “extended period”s replacement: “patient”. This particular adjective has been assigned a three-month time span which – if it is dropped at this week’s meeting – would tip a June 17 rate hike. The question that Dollar traders should be asking is how significant the impact a change or maintenance of the language will be. Given the currency’s record-breaking, eight consecutive month rally and the aggressive 7 percent rally these past few weeks (on the ICE Dollar Index); it would seem that the benchmark is set high. That said, there is certainly room for the bulls to carry on. While a June time frame seems the consensus amongst economists, Fed Fund futures are still pricing in the first move out to the October 28 meeting. There is market adjustment that can be made.

Looking beyond the excitement of timing the first rate hike for driving a pair like EURUSD down to parity, it is worth considering the bigger picture. Even if the first hike is realized in three months’ time, it is only a move off the zero bound. Moving forward, the pace of subsequent policy tightening becomes increasingly important. However, if the US does engage in a rate hike regime; it will increasingly contrast to major central banks (ECB, BoJ, PBoC) that are still exploring greater stimulus programs. So even if the FOMC downgrades its average December 2015 rate forecast from its 1.125 percent forecast at the December meeting, context is important.

For FX traders, the focus of the upcoming event risk is easily on the rates-Dollar connection. Yet, investors in any asset should take note of this event for its influence speculative appetite. A ‘yield chase’ has developed out of years of excessive monetary policy coupled with a moderate recovery. And, while the Fed’s own contribution to the system can notionally be replaced by the growing stimulus in Europe and Asia, risk aversion can still spread by the Fed’s shift. Given the dependency on low cost capital (chased with leverage) and the easy of contagion transmission across the global financial system (remember the Great Financial Crisis began in US housing), sentiment is on the edge of an inflated balloon. It also happens that the Dollar represents liquidity in a fire sale market.