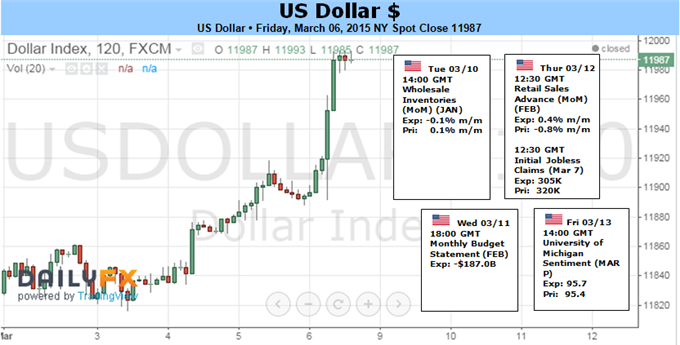 This will officially be known as ‘the week before the critical FOMC meeting’. However, we may not have to wait until the ‘mid-2015’ anticipated hike or even the March 18 central bank meeting that is expected to set the course to a clearer time frame before the market begins the painful process of adjusting to a normalization of monetary policy. For the Dollar’s part, the FX market is far more sensitive to rate forecasts and the currency has shaped a robust eight-month bull trend. As such, the strong rally following this past Friday’s NFPs doesn’t come as a great surprise. Yet, what was remarkable – and possibly a sign of a more systemic financial market shift – was the tumble from US equities. Have we reached that critical tipping point where investors will actually trade complacency and moral hazard for deleveraging and safety? Is ‘fear’ about to take hold?

Looking back to the event risk of the past months, there have been plenty of developments that reinforce expectations for the Federal Reserve to start lifting rates sometime in the second half of this year. The Dollar has readily responded to the growing probability while the broader financial market seems to carry on seemingly oblivious or indifferent. For the currency, even if the timing was seen many months into the future; a virtual global zero interest rate policy (leveraging a ‘Fed vs ECB’ type contrast) and inherent appreciation of yield in valuation has made it more responsive. Alternatively, capital markets have grown accustomed to and even dependent on accommodation.

In the aftermath of the Great Financial Crisis, the Fed and other central banks have slashed rates and flooded the system with stimulus. The original intention may have been to stabilize the financial system and then evolving into a need to support growth. Having maintained the regime this far, there is reason to believe the effort is at least in-part manipulation – either outright to confer a trade advantage (currency war) or unintentionally to avoid a disruptive return to equilibrium. Whatever the intention, the subsequent investing environment is one where volatility has dropped to extreme lows but so too have yields (rates of return). Desperate for return to beat or even match the incredible S&P 500 climb, investors have had to expose themselves to exceptional risk to compensate. The fear that such risk taking could lead to serious losses has been balanced by the ‘reach for yield’ and the expectation that central banks would maintain their support (moral hazard). Yet, at some point, that equilibrium will shift.

Given how deeply engrained expectations for manufactured stability and tepid returns are – six years of steady policy and equity index appreciation will do that – it is difficult to change investors’ priorities from ‘beating the market’ to ‘protecting assets’. A high profile event is an effective means to change the mass’s view though. This past week’s NFPs extended a familiar trend of labor market improvement and the more recent earnings upswing, but it is the timing that may have carried more sway over sentiment this time around. In other words, the S&P 500 (and other ‘risk’ positions) may have tumbled as the rate hike now seems to be only 3 months away. Waiting for the actual hike to reposition is out of the question because ‘others’ would be expected to adjust beforehand. Beating the crowd is now a practice in constantly taking the market’s temperature.

Has the February labor report already set off a cascade in deleveraging or is this just a stumble and a bigger push is needed? It isn’t clear, but the March 18 FOMC meeting – with updated forecasts and carefully constructed language – will weigh on every investors’ mind. For the Dollar’s part, a shift to risk aversion may initially see some losses for the benchmark as it has seen been treated somewhat like a carry currency. However, the deeper the financial retrenching becomes, the more frenzied the demand for the world’s largest reserve currency will become.