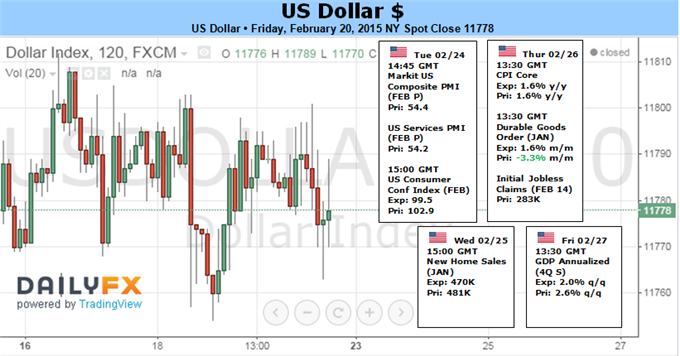 Dollar At Risk of Breaking Record Run But Will it Reverse?

The Dollar is at risk of breaking its record string of monthly gains at the close of the coming week. Seven consecutive months of rally through January’s close speaks to the incredible progress the currency has made since mid-2014 through relative strength in forecasts for growth, yield and even latent haven status. Yet, these past four weeks the Dollar has replaced steady appreciation for directionless consolidation. As the benchmark’s peers regain stability and its own forecasts plateau, indirect fundamental gains are thinning out. Furthermore, the S&P 500 closing at record highs push postpones the revival of the Greenback’s haven status. Yet, has the Dollar exercised the full extent of its relative appeal and are speculative appetites as robust as US equities insinuate?

In the incredible run the Dollar has mounted since the middle of 2013, the weakness of its most liquid counterparts has played a key role. These past few weeks, however, that well has begun to run dry. From the British Pound, the Bank of England emphasized that it was focusing on core inflation which was significantly removed from the record-low headline reading and could necessitate a move to tighten policy earlier than the market was anticipating. The weakest of the majors through 2013 and 2014, the Japanese Yen has similarly found regained purchase with the notes of concern starting to circulate amongst Bank of Japan policy officials about the negative impact of an exceptionally low currency and wage growth that is sharply weaker than CPI.

For liquidity, the most influential drag on the Greenback has been the stability the Euro has found. After nine months of tumble, EURUSD has spent all of February consolidating. Though the ECB is scheduled to begin a large, QE program next month; the market has already priced in a lot of that easing into the currency. Moreover, the fears of an impending Euro-area crisis have diminished significantly this past week. On the verge of a financial seizure, Greece and the Troika agreed to an extension of the country’s access to the funds it has relied on since its rescue. The situation is far from resolved, but room for further maneuvering means a situation where a flood of capital blindly seeking harbor in the only market comparable for liquidity has been averated.

In the absence of weakened counterparts, the Dollar needs to tap much more robust fundamental developments of its own to extend its climb in a meaningful way. The docket carries a number of important indicators – CPI, consumer confidence, housing data – but the spark that generates heat now will need to cut closer to the underlying theme. Moving up the timing and/or pace of the Fed’s tightening cycle is the most capable means for reviving the Greenback’s bid. That redoubles the importance of Fed Chairwoman Janet Yellen’s testimony before the Senate and House this week (the Humphrey-Hawkins testimony). Over the past weeks we have seen a decidedly hawkish lean from the central bank in an attempt to acclimatize the market to the start of the tightening cycle. In fact this past week multiple Fed members (Fisher, Plosser, Bullard) have said a removal of the phrase ‘patience’ (in reference to hikes) was necessary at the next meeting in March while a hike was impending – and may even be June. Since we have until March 18 before we receive definitive word on that kind of progress, Yellen’s remarks can offer an authoritative bridge.

As we focus our attention on monetary policy as the most active driver for the FX market at the moment, it is still important to keep a close eye on the health of speculative appetite. While US equity indexes closed at record highs this past Friday, they show many of the hallmarks of fractious conviction. Tepid growth forecasts, diminished earnings, near-record low rates of return and record levels of exposure to ‘risk’ leave the investment community in a truly precarious position. Should sentiment start to unravel, the question for the Dollar is how quickly the focus turns to liquidity and whether safe haven needs outpace the likely tempering of Fed rate forecasts in the transitional phase.