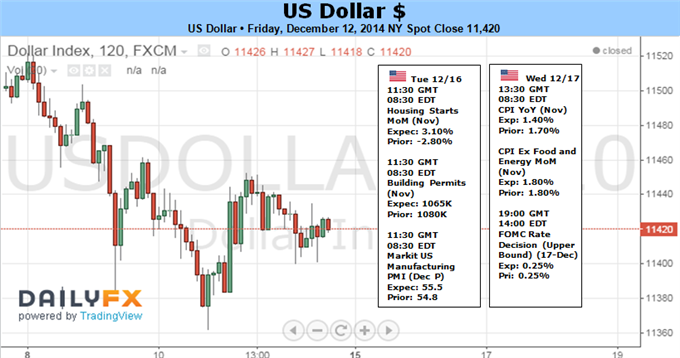 The Dow Jones FXCM Dollar Index (ticker = USDollar) dropped this past week for the first time since the mid-October, market-wide slump. At the same time, the S&P 500 suffered its worst tumble since mid-2012. This hefty decline in capital markets and subsequent swell in volatility measures has the look-and-feel of a broad risk aversion move. This correlation between what is traditionally considered a safe haven currency and the financial system’s most stubborn speculative beacon (US equities) has many calling the Greenback a ‘risk’ currency at the same time anxiety over systemic risk aversion sets in. With a vested interest in risk trends and a high-profile FOMC rate decision ahead, plan for a potentially volatile week for the Dollar.

While the Fed meeting will be top event risk for both the US currency and broader markets, it will be important to get the lay of the land heading into the release. In particular, the steady rise in implied volatility (expected price swings) alongside the uniform retreat in growth and yield-dependent assets has many market participants unnverved. Historically, there is a seasonal effect that sees the S&P 500 climb (averaging 1.9 percent) and volume drain to its lowest level of any month according to data going back to 1990. While it may not be difficult to deviate from the so-called ‘Santa Claus’ rally, it is difficult to overcome the liquidity exit. It would take heavy fundamental and price-based change to motivate traders to remain active.

If we fall short of the full-scale risk aversion pace, a correction from the Dollar and US equities would reflect a natural moderation of one-sided markets – not particularly surprising given the former’s five-month rally to multi-year highs and the latter’s incredible six-week surge (a record breaking 29 days above the 5-day moving average) to record highs. Left undisturbed, a further retreat for both would be highly likely. Yet, given the items on the docket ahead, it is unlikely to be a quiet moderation.

In terms of volume, there are plenty of speculative-worthy updates ahead. The focus, however, will be set on a single event: the FOMC rate decision. This is one of the ‘quarterly’ meetings where the regular decision on rates and unorthodox policies as well as the monetary policy statement will be accompanied by updated forecasts (growth, inflation, employment and – most important of all – intrest rates) and Fed Chairwoman Janet Yellen’s press conference. There will be two particular elements to this event which traders will be watching: a change to the interest rate consensus and what will be done with the ‘considerable time’ language.

The infamous ‘dot plot’ has fueled plenty of hawkish speculation – particularly with the last update in September. The consensus forecast for the benchmark lending rate was 1.38 percent through the end of 2015. To reach that level and still conform to the expected ‘mid-2015’ first hike, the Fed would have to practically raise rates through each of the policy meetings in the second half of the year. That seems aggressive given current inflation forecasts and the specter of cooler global growth trends seeping into the US. As such, a moderation of this aggressive clip is likely. But, how market-moving would it be? Fed Funds and Eurodollar futures are already significantly discounting the rate move (pricing in approximately 50 bps worth of hikes through year’s end).

The other key aspect of the meeting will be the ‘considerable time’ language that has been repeated in the accompanying statement for over two years. This phrase is considered a buffer zone whereby each time it is revisited, the market expects at least another six months without a hike. A few Fed officials – including Yellen – reinforced that particular time frame this past year. In the past few months, officials have weighed in on dropping it from the text. If we don’t see it, the market will set its countdown for six-months (June 18 meeting). Yet, here too, a ‘mid-2015’ hike has been a well-priced mantra. What matters more: the first move or the pace?