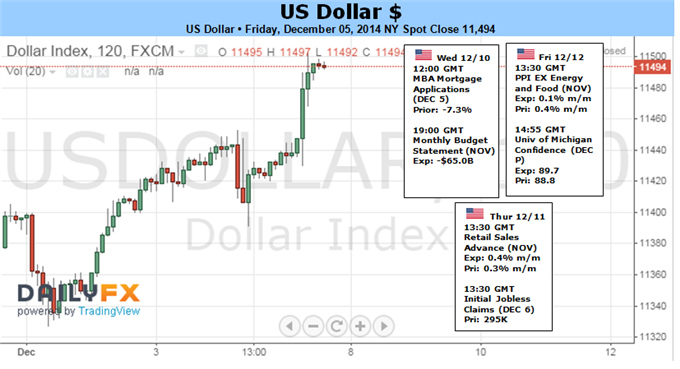 The US Dollar has dominated the FX market in the second half of 2014. Since mid-year, the Greenback has appreciated against all of its major counterparts with progress ranging from 4.7 to 15.7 percent (USDCAD and USDJPY respectively). This charge finds its bearings in a variety of fundamental currents, but the bulk of this move boils down to the extreme contrast between the benchmarks’ monetary policy and that of its peers. Has the robust November NFPs data catapulted the Dollar to the next leg of its bull run or will a decade-long EURUSD support mix with the year-end liquidity drain to finally stall the currency?

Fundamentals are playing a key role in the Dollar’s drive higher and will be increasingly crucial to momentum ahead. However, even those that ascribe primarily to the economic trends and risk-reward character of money flow must admit to the gravity of the technical picture the currency is displaying. On the one hand, we have benchmarks like the Dow Jones FXCM Dollar Index (ticker = USDollar) which has surpassed the mid-point of its historical range and seems unchecked by historical milestones that could trip up confidence. On the other, we have pairs like EURUSD. The world’s most liquid currency pair stands just above an obvious range floor that has been reversing the market’s bearish fits since November 2003. Such renowned deterrence is not easily overcome.

Of the Dollar’s primary motivators, monetary policy is the most active driver; and yet it has excised a lot of the discount that it can afford the unit. Though the Federal Reserve has not raised rates since dropping them to a record low back in December of 2008 nor has it made a move to reduce its stimulus-bloated balance sheet, its bearings are drawing stark contrast to the other major central banks. That said, after ending the QE3 program; a major threshold has been crossed. Meanwhile, the ECB, BoJ and PBoC have recently upgrade their own accommodation efforts and are running short on further options. Perhaps the most dramatic indirect boost the Dollar can realize going forward is an escalation by the European Central Bank to a full-scale stimulus program that shifts appetite further to the US currency. While this upgrade seems likely, the group made it clear they believed the decision would be made in 1Q 2015.

If the Dollar stops gaining ground on weakened counterparts, the forecast for its own rate potential looks exaggerated. The FOMC has wavered little in its forecasts for a first hike around mid-2015 and a moderate pace of tightening thereafter. This past week, the November payrolls (adding 321,000-jobs versus 230,000 expected) was a headline-worthy reminder of the United States labor market progress, but it doesn’t do the heavy lifting of moving forward rate hikes – that would be the duty of still-tame inflation. While the market is still running at a discount to the Fed’s forecasts, thecentral bank may soon see its consensus view downgraded at the next meeting (December 17). At the last quarterly meeting with forecast updates (September 17), a 1.38 percent-consensus arose for the end of 2015. That seems unrealistic against the ‘modest pace’ vow intoned by the group.

Alone, monetary policy poses a greater risk of Dollar losses than gains moving forward. Other elements of relative return like economic performance can generate greater traction, but not likely in the next few weeks of a diminished economic docket. Therefore, the most charged potential resides with a shift in the global appetite for capital market return. Rather than seeking out competitive returns, if the motivation was seeking absolute safety in a market shock, the Greenback can shift gears to a fully underappreciated role. Yet, as extreme as complacency and the reach for yield are, the December liquidity drain could prove too effective a restraint.