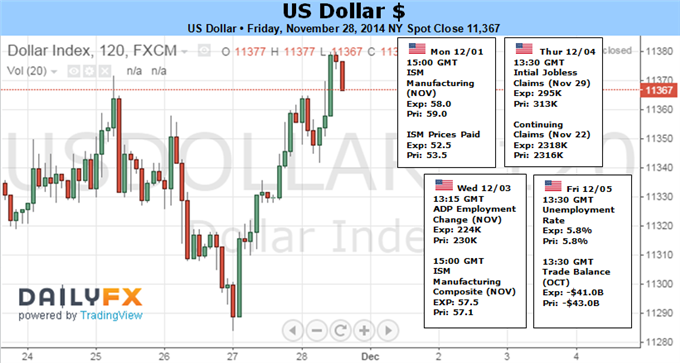 Like the US equities, the US Dollar reached to for a fresh high to close out this past week. In fact, the Dow Jones FXCM Dollar Index (ticker= USDollar) pushed to a fresh five-and-a-half year high and in doing so crossed the mid-point of its historical range at 11,350. While there are multiple fonts of potential Greenback support that can extend this run, the most important avenues are presenting an uneven drive. Between the currency’s role as a safe haven, its performance relative to its major counterparts and the outlook for its better potential returns; we may soon need a changing of the guard for its most prominent node of bullish appeal. Otherwise, flagging potential from its most successful sources of return may soon fall apart.

Of the three areas of fundamental support for the Dollar over the past months, the most substantial contribution to the climb has been the relative depreciation of currencies like the Euro, Pound, Yen and Yuan. These currencies have been weighed by a downshift in growth, a loosening of monetary policy and the reduction in expected returns that results from both of those elements. Strength or weakness is always relative, so the United States’ position as a comparatively robust expansion and the Fed’s persistence towards normalizing its own policy effectively built the perceived premium. Yet, how far can the US’s performance deviate from a global trend?

Global growth forecasts have degraded significantly as of late. Recently, the OECD warned that the Eurozone’s economic troubles posed the greatest threat to the global economy. Meanwhile, China – which has seen its growth pace steadily and purposefully cool – is expected to lower its target even further to 7 percent. In these circumstances, it is obvious that the capital will be drawn to the US; but can the world’s largest economy continue to run far off the pace of the global trend when the connections of performance are so interconnected? Historically, the correlation between US and World GDP is strong and positive. In fact, its current 12-month rolling correlation is 0.70 (strong and positive). Therefore, the longer and broader the global struggle, the more likely it hits the US.

Relative growth is a long-term driver, but monetary policy – which has been the key FX driver as of late – may also start to close the Dollar’s gap. Easing efforts by the Bank of Japan, European Central Bank and People’s Bank of China (the interest rate cut and end of repos) are pressing the bounds of policy options. All have in one form or another have admitted to limitations of policy in some forum, and some have taken steps to pull out of the nose dive – the BoJ is starting to express concern about the Yen depreciation and the PBoC has vowed to avoid a credit bubble. This coming week, the ECB will debate on whether to take perhaps the final, big-step policy differentiator in its arsenal (QE with government bond purchases), but it is more likely to come in 1Q 2015.

Meanwhile, the Dollar’s own separation from the pack via monetary policy may be reaching its near-term limitations. Until the market can close its disparate view for the timing and pace of rate hikes to that of the Fed or the Primary Dealers, premium will start to waver. And, this past week, 2-year break-even rates – a gauge of market-based inflation expectations – hit four year lows.

It will be difficult to ramp Fed-based rate expectations materially given global and domestic headwinds. Meanwhile, it also difficult unlikely that the United States’ global counterparts will continue to weaken materially while the country itself remains unaffected. That leaves one extraordinary and untapped fundamental outlet: risk trends. Assets with a ‘risk’ sensitivity are diverging more prominently, references to exposure and growth are growing more common, and a collapse from oil this past week sowed unease. Should unwinding turn into a need for a liquidity, the Dollar will tap into an as-yet unutilized fuel.