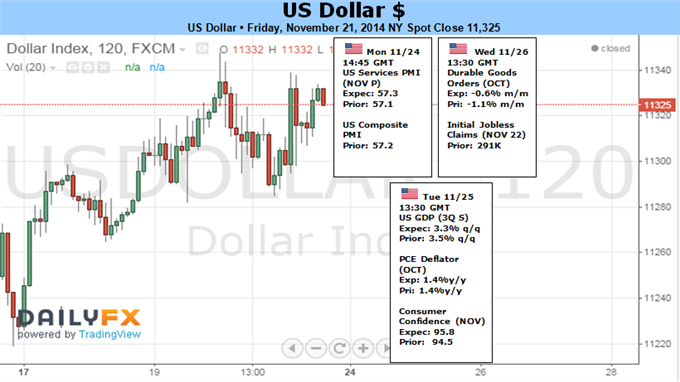 Dollar May Not Have a Quiet Thanksgiving...

From a fundamental perspective, the Dollar’s interest rate backdrop seems to be mired in debate over the timing of the inevitable first hike. Technically, many of its pairings have extended to multi-month or multi-year highs with large boundaries looming just ahead. And, perhaps most condemning for momentum is the ‘market conditions’ consideration of a seasonal liquidity drain for the financial markets for the US-based Thanksgiving holiday. Despite all of these factors, however, the Greenback is more likely to extend its stretch of volatility – and perhaps even extend its drive – as the market appreciates its ‘relative’ appeal.

In a vacuum, the Dollar’s fundamental bearings have grown mixed as of late. Employment figures still show improvement on payrolls, but wages and participant are struggling to catch traction. Sentiment indicators are leveling off after broadly climbing to multi-year highs. Housing data is starting to tremble and manufacturing readings have slipped. A tempered pace of growth would be a concern if it weren’t for the reality that the United States’ peers are in far more troubled circumstances.

Nowhere is the disparity in performance playing to the Greenback’s favor more than with monetary policy. Cooler global winds, the FOMC’s softer tone on perceived inflation threats and a thinly disguised desire not to upset financial markets has kept Fed from solidifying near-term rate forecasts. The markets are certainly unsure about the path of rates as Eurodollar and Fed Funds futures (used to hedge interest rates) project the first hike around September or October of next year. The pace thereafter is seen as very conservative. Yet, the September FOMC forecasts still stand – the central bank made an effort to say its view was unaffected by the October market correction, unlike investors’ view – and the Primary Dealers survey conducted by the New York Fed both maintain a mid-2015 or June move is still most likely.

As vague as the Fed’s hawkish path is, it is nevertheless ‘hawkish’. That contrasts dramatically from its major counterparts. The Bank of Japan has upgraded its open stimulus program back in October, while the 3Q recession and expected delayed tax hike add to forecasts. China offered up an unexpected upgrade of its own with the first interest rate cut in two years. And, the European Central Bank is on a path of steadily growing accommodation with a full-blow, government bond-centered program seeming not far away. These are the United States’ largest economic counterparts and their respective currencies the Dollar’s most liquid foils. Their descent indirectly lifts the US currency.

The influence that this relative monetary policy perspective (along with its growth, return and other fundamental implications) has over the Forex market – much less the Dollar – can keep the volatility fires burning for the asset class through the coming week. That is remarkable as the US-based Thanksgiving holiday period often breaks the transmission of risk trends and quiets the capital markets. With the persistent turmoil and pace of policy changes from the rest of the world, the financial system may override the seasonality effect of Thanksgiving. And, even if traditional assets like equities settle; the FX market is far more responsive to ‘mon pol’.

As our attention is set on the most productive fundamental theme (rate / stimulus forecasts) though, we must not write off the threat that an ill-turn in ‘risk’ poses. Given the state of leverage, participation, portfolio balances and asset prices; sentiment can be extremely mercurial. Should confidence bend, we are in for a far deeper well of market adjustment will follow…with heavy Dollar gains.