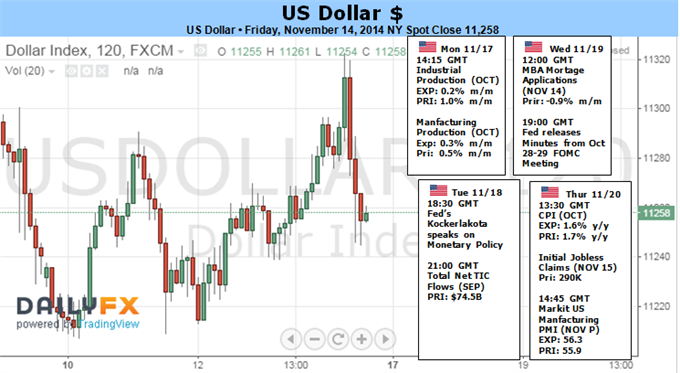 Dollar’s Next Leg: A Rally Charged By Risk or Retreat on Rates

The Dollar’s performance this past week was uneven but ultimately positive for the Dow Jones FXCM Dollar Index (ticker = USDollar). Recently, the currency has found most of progress through the miscues of certain counterparts – a global Yen drop on the BoJ’s recent stimulus upgrade or a GBPUSD tumble after the Bank of England’s Quarterly Inflation report changed the standings for rate expectations. For the Greenback itself, the fundamental sparks were minimal on a light economic docket and exceptionally quiet ‘risk’ backdrop. For traders looking for volatility and fundamental balance, this bout of ‘tranquility’ is unlikely to last for much longer though. With an impossibly quiet bearing from the S&P 500, the approach of key monetary policy-related data and unfolding themes amongst its major counterparts; the Dollar is unlikely to escape without a charge.

Fundamentally speaking, our top concern should always be the theme that holds the greatest market-moving potential without straying into the realm of a ‘black swan’ (a highly unlikely event or scenario). A more motivated unwinding of risky exposure is far from a black swan – it is a warning being sounded by international economic organizations, governments and monetary policy authorities. However, perceptions of an imminent threat are minimized when benchmarks like the S&P 500 are closing at record highs. It is true that US equity indexes are scaling uncharted territory and the VIX volatility measure has collapsed. Yet, other assets affected by sentiment are not so sanguine. Other developed world capital markets, carry appetite (outside JPY), high-yield assets, commodities, emerging markets and others are significantly weaker.

The disparity between the S&P 500 as a hold out and its financial market counterparts is in part a relative performance/economic vote, but it is primarily fostered by a lack of commitment to build upon or unwind existing exposure. Such ‘complacency’ in an actively changing global environment of economic growth, finance and geopolitics cannot last. And, the signs of a disconnected sense of awareness seem to hit extreme levels. The S&P 500’s chart shows a hyperbolic, four-week rally to record highs is flagging and showing contrast with fading volume. In fact, the 5-day (one trading week) realized volatility level for the market dropped to 1 percent – the quietest reading since 2005 set against a standard VIX measure that is already straying from the broader market.

Despite the assuredness of the market, the warnings by officials of unappreciated risks and a future of greater volatility are reiterated regularly. Some are even starting to identify stimulus and other central bank accommodation as a cause of the building pressure. While most officials don’t admit/believe such a pressing risk exists, they seem to recognize a connection. That is perhaps why there is little objection domestically and abroad in the Fed’s shift towards normalization (ending QE and a move towards hikes). The FOMC board has officially maintained an optimistic outlook for growth and a bearing that draws the first hike nearer. We will see how far that progress extends this week with the central bank’s meeting minutes and October CPI reading due. As it stands, Fed Fund and Eurodollar futures are significantly underpricing the Fed’s own forecasts; so there is plenty of fuel if the disparity closes favorably.

Then again, rate expectations can also work against the Dollar if it seems the US will have to conform with its international counterparts as growth softens. Strength on this front is relative. That said, the Greenback’s counterparts will prove moving targets in their own right. A heavy economic docket holds out: a G-20 meeting; ECB President Draghi testimony and rumored ABS purchases; a BoJ rate decision and Japanese GDP; as well as UK CPI and BoE minutes.