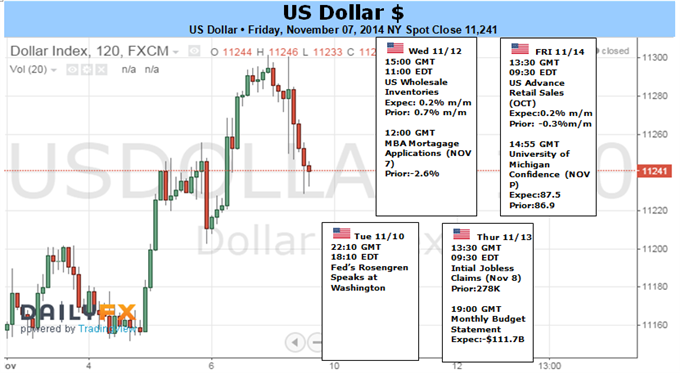 Many of the ‘majors’ pushed multi-month or year extremes in favor of the Greenback, and the Dow Jones FXCM Dollar Index (ticker = USDollar) powered to a five-year high this past week. Price action says the currency is on strong footing, but the traditional fundamental cues still seem to supply a contradictory picture. The S&P 500 and VIX volatility index – both considered consummate ‘risk’ measures – have advanced to a record high and slipped back below a three-month average respectively. Meanwhile, with the Bank of Japan’s surprise upgrade to its QE program and the European Central Bank vowing to do everything it takes; the global stimulus tab looks to be on the rise. Why is a currency that represents safe haven and stands as a leader of the unorthodox monetary policy trend outperforming under these circumstances? And, can it continue to project its strength when boundaries like 1.2000 for EURUSD come into view?

First thing’s first. How has the Dollar advanced against a backdrop of a reach for yield (‘risk appetite’) and a softening of monetary policy. For investor sentiment, optimism may not be as hearty as some of the traditional gauges insinuate. Favorite indicators like the S&P 500 and and the VIX are indeed offering a performance that is considered a signal of strong confidence and appetite for higher returns than what he Greenback and relatively-safe US assets are traditionally capable of providing. However, these gauges don’t seem to be providing the same pressure readings as others.

European and Asia shares markets are still far off pace for multi-year – much less record – highs. In other risk-sensitive capital markets, there is a similar hesitation and even some outright bearishness. Commodities, high-yield assets and emerging markets are all on different trajectories. Perhaps the best risk measures are the implied (expected) volatility measures for different asset classes. The violent surge in the VIX distorts the view of activity in equities. A dramatic retreat is a mirror of the preceding swell, but its current level is still on a gradual course higher from multi-year lows set mid-year. Meanwhile, volatility measures for yields and commodities are offering clearer trends higher. Most impressive though is the FX-based measure which hit a 13-month high this past week.

Ultimately, capital flows define sentiment levels; and the Dollar is still considered a particularly extreme brand of haven – prized for liquidity which traders scramble for in more intense risk aversion scenarios. That said, volatility localized in the FX market may provide a more adept lever for the dollar which is why the FX VIX – USDollar correlation is a remarkable 0.86 (strongly positive). For triggers to risk trends in the week ahead, the docket carries events like the G20 meeting, Euro-area GDP figures and ground level indicators. While important, these aren’t milestones that are considered single-handedly capable of turning tides.

In the lack of a decisive driver on the sentiment front, the dovish lean in global monetary policy can offer a more consistent feed to the Dollar’s rise. It is true that on-balance, the world’s stimulus balance has grown and is projected to continue to do so. Yet, growth is now specifically led by the ECB and BoJ amongst other global sources. Meanwhile, the Fed has kept its moderate, but nevertheless hawkish, view. Consequently, a dovish view globally is actually a boon for the Greenback as it is going against the current. Fed Chairwoman Janet Yellen cemented this constrast Friday when she joined the IMF in calling on European and Asian officials to do whatever was necessary to support their economies. – JK