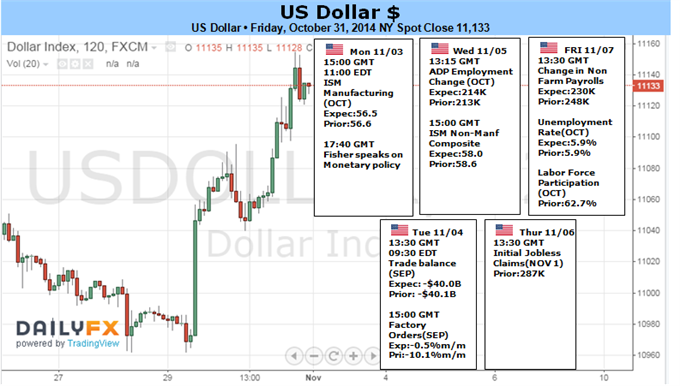 The US Dollar continued to reassert itself in the final days of October, rising for a second consecutive week to produce the largest advance in over a month against its leading counterparts. The move was primarily driven by a comparatively hawkish FOMC monetary policy announcement. The markets were positioned for a dovish rhetorical shift reflecting a desire to safe-guard the US recovery from knock-on effects of slowing growth in the Eurozone and Asia. As we suspected, Janet Yellen and company opted to stay the course, concluding the QE3 asset purchase program and delivering a broadly status-quo policy statement.

This makes for a data-sensitive environment going forward as speculation about when normalization will commence continues. Priced-in expectations telegraphed in Fed Funds futures shifted one month forward in the aftermath of the FOMC meeting, with investors now expecting the first rate hike by December 2015 compared with a call for January 2016 prior to the policy announcement. The week ahead will offer ample opportunities for this to evolve further as a slew of high-profile economic data points cross the wires.

Needless to say, the spotlight will be on Friday’s Employment report. Nonfarm payrolls are expected to register an increase of 235,000 in October, marking a bit of a slowdown following the 248,000 gain in September. The unemployment rate is seen holding steady at 5.9 percent. Leading surveys suggests that the pace of hiring across the manufacturing and services sectors was unchanged compared with the prior month however. Furthermore, data compiled by Citigroup shows that US economic news-flow has broadly outperformed relative to consensus forecasts since August, hinting analysts are under-appreciating the recovery’s vigor. On balance, this opens the door for an upside surprise.

A medley of activity indicators will precede the jobs report, with October’s factory- and service-sector ISM readings, September’s Factory Orders data and the leading ADP estimate of hiring activity taking top billing. The twin ISM reports may prove most problematic, reflecting a slowdown in economy-wide activity. A dip in the pace of expansion compared with the peaks seen in the second quarter is not news at this point however, emerging leading survey figures some months ago and confirmed in last week’s third-quarter GDP report.

The Fed has clearly opted to look past this deceleration and will likely tolerate a steeper slowdown still before adjusting policy considering its steady hand through a far more dismal first quarter. A packed schedule of commentary from Fed officials including Chair Yellen will probably help hammer this point home in the days ahead. With that in mind, the greenback looks poised to continue higher (albeit not in a straight line) as firmer jobs data suggests stimulus withdrawal may arrive sooner rather than later.