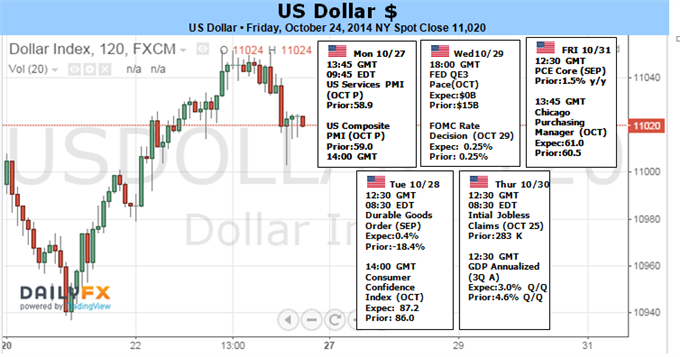 The US Dollar managed to muscle out a modest advance this past week despite favorable winds for investor sentiment (through benchmarks like S&P 500 and volatility indexes) as well as a persistent dovishness in rate forecasts. Such resilience given the downgrade in its return potential and disinterest in safe havens is encouraging. However, that shouldn’t lead us to view the currency as being fundamentally indestructible. Last week was a period of respite. Reflection after the broad selling of ‘risk’ through the opening half of October is reasonable when key, open-ended fundamental themes are unresolved…and facing the kind of definitive milestones we expect in the week ahead. Both the Greenback and market-wide sentiment may finally find their cue for trend in the forthcoming event risk.

From a wealth of US and global event risk scheduled through the coming week, the most potent catalyst will be the Federal Open Market Committee’s policy decision Wednesday (18:00 GMT). This will be important for the Dollar on multiple levels. It will most readily feed speculation surrounding the relative future yield of the US currency and its assets. In the past few weeks, US rate forecasts have collapsed. A combination of downgraded global growth forecasts, tepid domestic data and provocative comments from a few Fed officials has pushed out expectations for the first rate hike and the trajectory of the pace thereafter.

From Fed Funds and Eurodollar futures (used to hedge interest rate risk), we find the market doesn’t entertain the chance of the first hike in the policy regime change until September 2015. Previously, the running consensus was for a ‘mid-2015’ move interpreted as the June 17 meeting. Furthermore, the pace of tightening has been downgraded so that now the benchmark rate is expected to be 0.46 percent on December 2015 and 1.36 percent come December 2016. The FOMC’s own consensus forecast for the same periods released just last month are 1.13 and 2.50 percent respectively. That is a substantial discount the market is ‘pricing in’.

This severe discrepancy will shape the market’s reaction to the event itself. Given the dovish view, a ‘neutral’ outcome could elicit a strong bullish outcome for the Dollar. In this case, holding true to the central bank’s trend through its past meetings of a final Taper to the QE3 program and undisturbed consensus (cautious optimism for the economy and employment) would indicate to the market that the Fed is keeping to its schedule and the consensus forecasts they produced in September. To meet the market’s level of dovishness, we would need to see either a delay in the final Taper (highly unlikely) or a significant softening to the tone in the monetary policy statement that accompanies the announcement.

What makes the upcoming rate decision even more intoxicating for the Dollar is its potential systemic influence over sentiment. Many attribute the sharp drop in global equities and other return-oriented markets earlier this month to a ‘Taper Tantrum’ – or the realization that stimulus regimes were shifting and the support for excessive risk taking was reversing. If that fundamental assessment is accurate, the Fed maintaining its path towards tightening can quickly wipe out this past week’s gains and definitively undermine a precarious market structure of record leverage, tepid participation and dependency on extremely low volatility conditions. In other words, we could see an aversion to risk that can fully engage the greenback’s safe haven quality.

While much of the Dollar’s and market’s potential revolves around the FOMC decision, there will be plenty of event risk at hand. The US 3Q GDP reading and the impact to the Euro (the second most liquid currency) from a glut of important event risk should also be monitored. Yet, should push come to shove, an active response to the FOMC will override all other interests. – JK