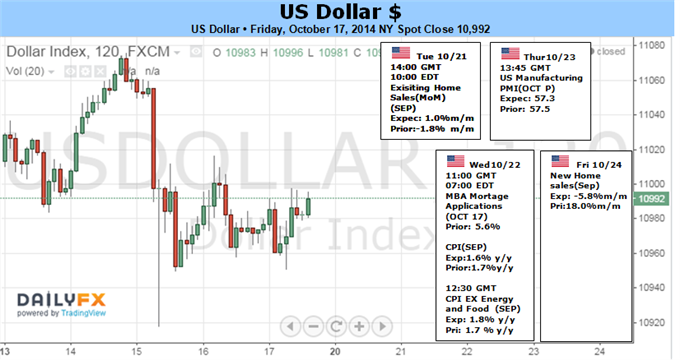 Dollar and the Markets Contemplate Volatility and QE

Amid extreme financial market volatility swings and talk of US stimulus plans, the US Dollar finished out a second consecutive week in the red. Yet, despite the past few weeks retreat, the currency’s larger three-month bull trend is still dominating the landscape. That technical view matches the fundamental backdrop. While there have been a few headlines and updates to cool the Dollar’s exceptional climb, there hasn’t been enough of turn the tides back towards the bear’s favor. Moving forward, the anxiety of a fragile gobal investor sentiment, a reinforced path of monetary policy and a possible second wave decline for the the Greenback’s largest counterparts will all support the currency’s medium-term view.

When liquidity returns next week, the first concern for market participants will be the bearings for broader sentiment. Investor confidence passed through two stages this past week. The first half was dominated by heavy selling in capital market assets that confirmed an important break that ended the previous week. Yet through the second half, a rebound for the higher return / higher risk segment and retreate for safe havens developed. In fact, through this heavy swing in confidence, the US currency never seemed to truly find grip through its safe haven status.

There is a difference between an unfavorable move in capital markets and a motivated ‘risk unwind’. The latter speaks to conviction and a motivation that is more elemental to the financial system. After a five-and-a-half year climb from the bottom of the worst economic and financial collapse in generations, it is difficult to unmoor complacency and convince market participants to cut exposure and feed speculative shorts. Yet, the recent scope of selling riskier assets and the tremendous rise in implied (expected) volatility herald a more motivated shift is building. Against record leverage, decades low participation and a cooling economic backdrop; investors are increasingly aware of the medium-term gap between price and value.

As the motivation shifts from a modest ‘risk off’ to a more systematic deleveraging, liquidity becomes the primary concern for market participants. That leverages demand for US Treasury, money markets and the Dollar itself. It may take time to reach this intensity, but implications are acute and the structural deficiencies to our current situation large enough that it planning is important. As we await the mass’s verdict on the market’s course and potential, a few other factors should be considered while trading the Dollar. The first consideration is a recent flush of hope that the Fed could backtrack on its tightening regimen.

This past week, St. Louis Fed President James Bullard – not a voter this year and more on the hawkish side with a recent call for a 1Q 2015 rate hike – turned heads when he suggested the FOMC should consider delaying its final Taper of QE3. His suggestion is more targeted towards tepid inflation, but the market in withdrawal and desperate for support reads it as a capital market boon. Realistically though, this isn’t a popular opinion and the Yellen sounded very confident of an October 29 final move at the last meeting. Furthermore, delaying a few months a scaled down stimulus isnt’ the same as an increase for encouraging risk trends. We will see little more on this topic with the media blackout period coming ahead of the next meeting.

A final consideration for those trading the Majors: counterpart activity. This past week’s shudder in risk has clearly exposed the Euro-area’s troubles. Whether a trigger for global risk aversion or a direct counterbalance for the Dollar, this has considerable potential. We also have Chinese and UK 3Q GDP data on tap. – JK