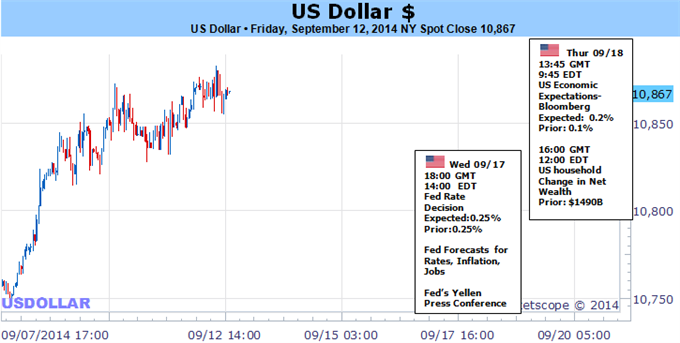 The US Dollar’s incredible climb was ramped this past week. The 1.2 percent surge from the Dow Jones FXCM Dollar Index (ticker = USDollar) was the largest in 10 months. The acceleration is just as impressive as the currency’s persistence. With Friday’s close, the greenback has closed nine consecutive weeks of advance. That is the longest advance on records going back to 1999 - when the Euro was introduced. Using the ICE Dollar Index’s extended history, a similar run shows that the nine-count matches the longest advances going back to 1967…nearly 50 years. Momentum looks self-sustaining, and few things seem as if they could curb this move much less reverse it decisively. But, it just so happens that one of the most capable fundamentals cues is dead ahead.

Wading through the most loaded global economic calendar in months – if not longer – it is the FOMC rate decision that takes top honors for potential market impact in terms of localized volatility as well as turning the tides of the entire financial markets. This particular meeting is expected to bring the second-to-last Taper by trimming it further down to $15 billion per month. However, that isn’t what the markets are holding their breath for. This gathering also happens to be the quarterly event whereby the central bank releases its updated forecasts on inflation, employment and interest rates as well as where Fed Chair Janet Yellen holds the regular press conference.

The tone that the central bank strikes with this meeting will prove critical to the dollar, one way or the other. A nine-week, 4.4 percent rally for the USDollar alongside a three-year high for US 2-year Treasury yields suggests market participants expect the central bank is gearing up for a near-term withdrawal of accommodation (conservative language for ‘rate hikes’). Therefore, if the Fed fails to upgrade its forecasts or in some way convey a more hawkish demeanor; there is pent up speculation that can be unwound.

On the other hand, the currency’s performance does not preclude room for further appreciation on the basis of an increased willingness to return to hikes. Looking out the yield curve, we still see skepticism and complacency. Perhaps the most prominent indication that there is pent up potential here are the Fed Funds futures. The rate products used to hedge changes in interest rates are significantly discounting the FOMC’s own forecasts. Where the last June forecasts projected a benchmark rate of 1.13 percent at the end of 2015 and 2.50 through the end of 2016, these futures currently price in 0.77 and 1.82 percent respectively.

Looking for changes in the forecasts and combing through the group’s verbiage, we should see whether the group is making a material effort to guide the market’s expectations. In the recent past, we have seen both FOMC members and research papers note that the market’s expectations for monetary policy are misaligned from the central bank’s own views. That poses a serious risk for policy officials as the eventual shift will prove more damaging to the stability of the financial system. Steady and measured adjustment is far preferable to a central banker. Efforts may be made to specifically close this gap.

While most FX traders will be gauging this event for its impact on the US Dollar, it will be important to remember just how substantial is scope is. The Fed’s stimulus efforts have played an early and pivotal role in establishing the low volatility, high leverage and low participation complacency conditions we find ourselves in today. If investors recognize a change in the financial landscape, the repercussions can prove far more pervasive than just a dollar correction. We may finally see complacency collapse. – JK