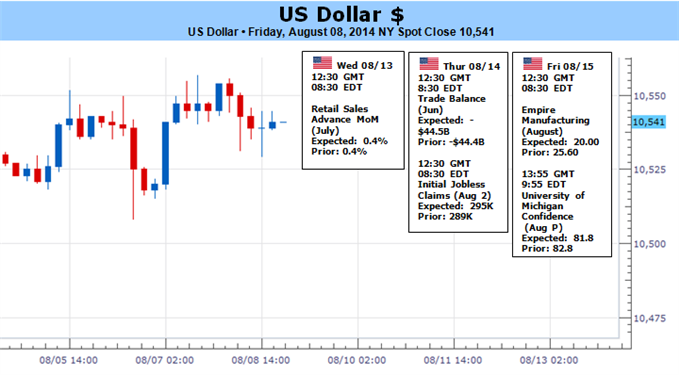 US Dollar Traders Focus More on Volatility, Less on Fed

The US Dollar advanced against most of its major counterparts this past week, but that doesn’t tell the whole story for the benchmark currency. In reality, the greenback was essentially little changed. That is better understood when we look to the Dow Jones FXCM Dollar Index (ticker = USDollar) which shows more than a week of congestion. Fundamentally, the dollar has been left adrift. High profile event risk has thinned out and the market’s obsession with rate forecasting has tempered. Yet, we might just find something far more provocative and capable to take up the currency’s reins: risk trends.

As the world’s most liquid currency, the dollar tends to absorb one-off fundamental developments with limited impact on price and finds its motivation and bearings from the most systemic of financial drivers. Since mid-2013 when the Federal Reserve laid out specific targets for its change from an accommodative stance to a regime of normalization and rate hikes, monetary policy became a key driver. Yet, as wecome closer and closer to the inevitable rise in interest rates (still six months out if you’re in the more hawkish crowd or up to 12 if you’re a dove), the draw of this important mark of valuation has diminished.

The central bank’s decision to abandon its hard targets was a big factor in the driver’s subsiding potency. Moving forward, rate speculation’s influence will be driven by data that meaningfully alters the consensus for timing and the market’s assessment on what is fairly and fully priced. Looking at Fed Funds futures, we find that the market maintains a sizable discount to the FOMC’s own forecast for rates. According to the last rate forecast produced after the June policy meeting, the benchmark rate is seen at 1.12 percent by the end of 2015 (they generally move in 25bp increments, but this is an average) and 2.50 percent by the close of 2016. Yet, we find the market pricing in 0.69 and 1.69 percent respectively.

Event risk over the coming week will carry limited ability to sway rate forecasts one way or another. For data, we have a small business sentiment survey, retail sales, upstream inflation pressures (PPI) and the University of Michigan’s consumer confidence report. Considering that it took 2Q GDP, NFPs and the Fed’s own monetary policy meeting to forge the dollar’s advance through the end of July; this data will struggle for traction.

In the meantime, we may see the FX market’s other dominant fundamental catalyst take over. While Treasury yields often stand in as a good proxy for interest rate forecast; they are also a reflection of global investor sentiment. As a top rated asset that has worked its way into the category of ‘risk-less’ and ‘cash equivalents’, the fixed income instruments have become synonymous with safe haven and are particularly appealing when liquidity is pinched. Separating the demand for yield from the demand for safe haven can be tricky. But both conditions – when engaged – are supportive for the dollar.

Over the past year, many have wondered whether the ‘Risk-On-Risk-Off’ relationship has broken down. Given the recent swell in volatility readings for different asset classes and the building uniformity of deleveraging showing through in certain assets, the masses are starting to recognize that it has always been in play…it was simply awaiting conviction. As measures like the FX Volatility Index show consistency in their climb and benchmarks like the S&P 500 crash through ever more important levels of support, the appetite for the dollar (and the market it represents) will build. See the Weekend Strategy Video to learn more about the changing trends in volatility.