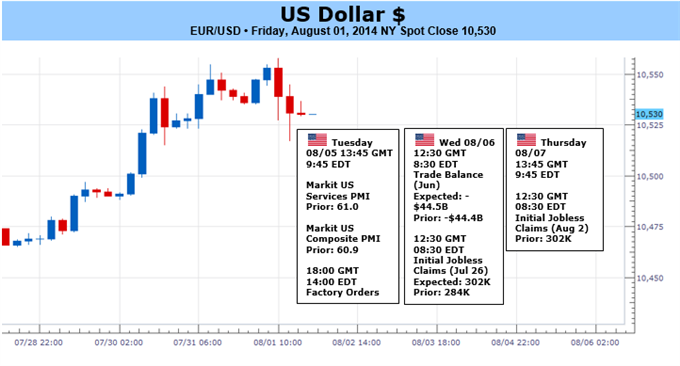 US Dollar Rally at the Mercy of Volatility, Interest Rate Trends

The Dow Jones FXCM Dollar Index (ticker = USDollar) mounted its biggest rally in six months this past week. That is a serious reversal of fortune from the technical collapse the currency was facing in the first half of July. Yet, the transition from rebound to full-blown rally is a jump the dollar may not be able to make. After grinding out hard-fought gains against its major counterparts, the greenback’s top fundamental drivers are starting to show the tell-tale signs of doubt. Will US interest rate expectations finally hit the same stride that carried the Pound to seven-year highs? Are we on the brink of an all-out risk aversion move?

There is no denying the dollar has put in for a healthy rebound this past week and month. The currency is up against all major counterparts over both time frames. Broad and robust moves typically reflect innate strength. And, that means its primary fundamental drivers – interest rate speculation and appetite for a safe haven – were working together to forge a common platform for bulls. The problem is that both are facing serious headwinds in the coming week.

Arguably the least constrained theme these past months, interest rate speculation was powered by a broad range of important event risk this past week. Following the significant 2Q GDP beat (4.0 versus 3.0 percent expected) and the FOMC’s measured move towards normalization mid-week, rate watchers started to move. Two-year Treasury yields (which fall within the expected time frame for the central bank to shift to a hawkish regime) rallied to three-year highs, while implied rates measured in Fed Fund futures moved closer to Fed forecasts. That run was severely disrupted though by the end of the week the combination of the July employment and June PCE inflation figures – key metrics for the Fed’s main policy targets. Both printed dovish outcomes and the two-year yield ended 19 percent off its mid-week high.

Interest rate speculation can maintain its own momentum – the British Pound is a good example of this – but encouragement is needed especially in the early stages. We simply do not have a clear enough inflation pressure nor a hawkish enough group of voters (hawks Fisher, Plosser and Mester all lose their vote in 2015) to ensure a self-fulfilling cycle. Meanwhile, the docket this week is relatively light for the items that can secure conviction. An ISM service sector report, August IBD economic sentiment survey and June trade figure are top listing. There are no central bankers scheduled to speak.

The most capable backup for the dollar’s run also happens to be the most difficult to ignite. If there was a bigger theme this past week than the dollar’s it was the surge in volatility. The activity barometers maintain their distinct relationship to speculative appetites, and the VIX Index’s advance to 17 translated into the biggest drop from the S&P 500 in two years. The amplitude of the move is a persuasive indication of ‘risk aversion’ on the scale that would activate the dollar’s liquidity / safe haven status.

However, we have seen many similar jumps before over the past years only to have them evaporate as the market buys the pullback and revert quickly back to complacency. What would separate this instance from previous false starts? Consistency. There are early signs that the underlying trend in these volatility measures is turning higher but we are still short of a virtuous cycle. If the selling and deleveraging pressures persist next week, the dollar will likely mount serious gains versus its counterparts. But don’t expect the market to fold so easily.