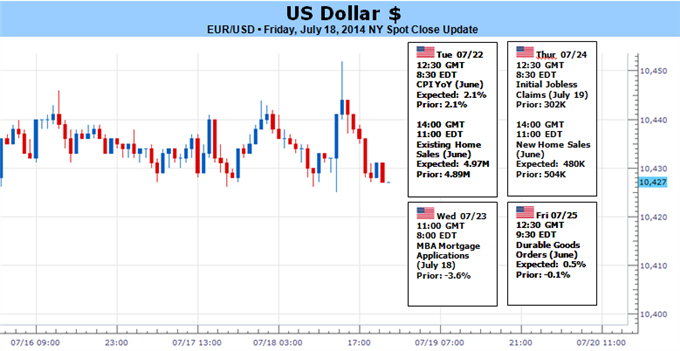 - Volatility measures can’t fall much further, and that imbalance offers immediate benefit to the US Dollar

There was a considerable commotion in the financial markets this past week with sharp declines in global equities and sizable swells in volatility measures (the short-term equity-based measure increased nearly 60 percent on Thursday). Yet, a notable contrast to this chaos was the more moderate response from FX – and particularly the calm demeanor of the US Dollar. If the greenback is considered a safe haven, why did it not rally as other capital markets felt the effects of fear? What does this mean for the currency moving forward?

Last week’s volatility originated with two startling headlines: a downed plane in the disputed territory between Russia and Ukraine, and the start of a ground offensive in the Gaza Strip. Both carry serious geopolitical ramifications and thereby generate distinct concern amongst investors that have increasingly exposed themselves to risky assets and are dependent on stability. As grave as these concerns are, we have seen comparable bouts of fear in the past whereby the market has recognized and acclimated – ultimately returning to ‘status quo’. What separates the current situation from similar circumstances in the past is the financial backdrop. Activity levels, positioning and underlying fundamental themes are shifting.

Volatility measures have, in recent weeks, hit multi-year (equity, emerging markets, commodities) and record (FX and rates) lows. A natural low is inevitable where real returns (activity adjusted) have evaporated. The absence of premia in turn dissuades short-term traders – the primary active market participant through 2014 – looking to buy dips or “sell volatility”. Anemic volumes and open interest reflect the steady withdrawal of active market participants and liquidity that is crucial to stabilize market when fear arises. We can already see this eroding conditions: in the ‘stickiness’ of this most recent spell of volatility and a growing divergence in the performance of ‘risk’-sensitive assets.

The dollar represents a safe haven with a particular appeal. Fronting the world largest and most regulated market, it is prized for liquidity. That means that temporary jumps in volatility carry far less weight here than with an equity index or even a Yen cross. Then again, the current reach for yield in thinner markets represents a perfect opportunity for the currency as a conditions normalize.

Looking at the docket ahead, there are few events that look to carry the heft of a definitive change in sentiment. Furthermore, given the market’s immunity to so many other high-level event risks – FOMC decision, employment reports, external headlines – it is more likely that optimism will cave to the reality of positioning under its own power. On the other hand, the docket offers up a listing of key event risk for the other key driver for the dollar: interest rate expectations.

There is no true level in unemployment that the Fed is necessarily forced to hike rates at. The need to tighten monetary policy is developed through inflation pressure. That means the timing on the Fed’ s first hike and subsequent pace depends on readings like Tuesday’s CPI consumer inflation figures for June. The headline figure is expected to hold at 2.1 percent and core at 2.0 percent – both conspicuously at the central bank’s target. While the group’s favored measure is the PCE – which is materially softer than this reading – the more pressure seen in this market-favorite, the more pervasive the situation and more likely a bank response.

Another consideration for interest rate speculation behind the dollar is the knowledge that there is higher profile event risk due the following week. July NFPs, 2Q GDP and a FOMC rate decision are all on the docket another week out. It is commonplace for the market to weather near-term fundamental turmoil in deference to bigger event risk on the horizon. So, while there is plenty of favorable opportunity in both risk trends and rate forecast potential moving forward, we must bear in mind its timing as a catalyst.