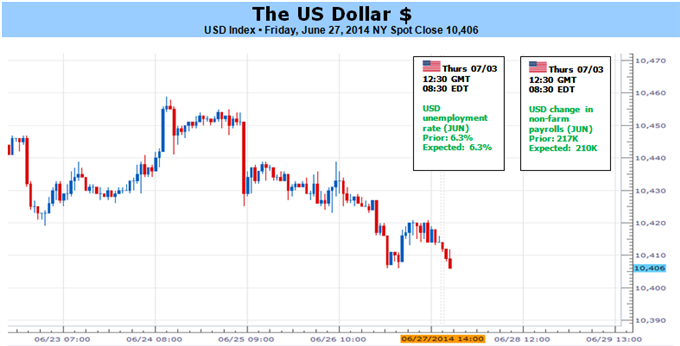 US Dollar: NFPs Versus Fading Volatility

Hope is high amongst traders that the low volatility environment that has forced many to change to a short-term approach or stay sidelined for near-perfect setups will end soon. Volatility is a critical ingredient to the dollar’s performance moving forward. Not only does the greenback represent a preferred safe haven – in demand when fear clouds the appeal of most other assts – but complacency has further dampened speculation surrounding the Fed’s policy plans. To jump start market swings or speculation of a more timely FOMC rate hike, we need volatility. Yet, given the confluence of a holiday liquidity drain with historically low levels of activity, it will be exceptionally difficult to jump start meaningful trends even with the help of June NFPs.

In analyzing the market: there are three different types of general forces that shape the environment. Technicals have offered up tantalizing setups for weeks. Though, for the most part, those opportunities have fizzled out shortly after triggering. Fundamentals can provide the drive that feeds trend and momentum as more investors recognize the change in expectations. Yet, a move on a trendline break and even the rise or fall of a major systemic theme is rendered powerless if there is no market to support the move. Volatility is both a reflection of participation and motivations – both of which are exceptionally deflated.

Recently, we have seen activity levels in the capital markets slide to seven year lows and those in the FX market slump to a record. This has resulted in large part from a collapse in interest rates, a swell in cheap funding and a dive in participation (volume). In the week ahead, this situation risks growing even more extreme. We are entering the ‘Summer Doldrums’ and the liquidity drain that occurs around the US Independence Day holiday we only further stress the situation.

The backdrop for activity will pose an ironic contrast to the scale of event risk on deck. At the center of a US calendar that includes sentiment surveys, manufacturing measures and Fed speeches is the June NFPs. This is one of the rare occasions that the labor data will be released on a Thursday due to the market holiday falling on Friday. Under more normal conditions, this data can generate substantial waves for risk trends. That is unlikely this go around – barring an extreme surprise – given traders will be shutting down early in the NY session to leave for the extended weekend.

Despite the curb on speculative interests due to this event, there is another facet to the jobs data that can carry forward and impact the dollar later: interest rate speculation. At the June 17 FOMC meeting, the central bank extended its Taper and laid out its forecasts. Notably, the interest rate forecasts suggested by the policy body are materially more aggressive than what is being priced in by the market. For example, the Committee’s average forecast of thebenchmark rate through the end of 2015 is 1.15 percent. The market is pricing in a 0.69 percent rate. There is plenty of room for speculation to adjust in this dynamic, and a capitulation by the market would mean a substantial dollar rally.

So, while there may be near-term hurdles for the dollar, the outlook presents a material skew in the bulls favor a little further out. Where the dollar is kept in check by the persistent but tepid equity market run, it is more likely to be proactive should risk aversion kick in. Meanwhile, interest rates – dictated by longer-term trends – are heading higher, and the market is undervaluing the return potential. The future looks favorable for the dollar…just not the immediate future.