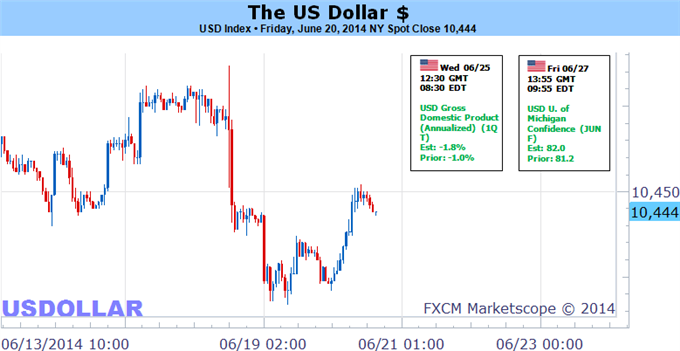 - See the DailyFX US Dollar Economic Calendar for the following week.

The most effective means for leveraging a significant rally from the US Dollar is for a shock to resonate through the global financial system. In other words, have a significant event trigger a deleveraging of the ‘yield chase’ effort that has been building over the past years and see the flight to quality as well as repatriation of funds lift the greenback. Yet, hoping for volatility is just that – hope. We need something more tangible than an ideal scenario to work with if we are looking for timely trades. Interest rate expectations are still an active theme to work with, and the dollar’s relative position to the Euro may prove one of the more rewarding drivers in the immediate future.

Interest rate speculation amongst the majors (US, Eurozone, UK, Japan) is a key fundamental theme - the dominant one so long as markets are neutral on the tides of 'risk' trends. Looking out over the field, we have the Bank of England (BoE) seemingly on pace for the first rate hike of the majors; the Bank of Japan (BoJ) seems intent on feeding its open-ended QQE program; the People's Bank of China (PBoC) is expanding and trimming its efforts at irregular intervals; and the European Central Bank (ECB) has taken recent steps to escalate its own effort. In this field, the Federal Reserve is winding down its QE3 program - on pace for an October halt - and sees a mid-2015 first hike. That is considerable advantage.

FX markets are forward looking, so the timing for a Fed hike that is second only to the BoE is a substantial advantage. And, that edge is certainly not priced in. Given the open range of possible times for the first hike, there is still room for the dollar to gain or loss ground as data and policy rhetoric shape the consensus. On that front, the docket has a few noteworthy points to watch for. On the speaking schedule, we have four Fed members scheduled to speak. We know that Lacker will speak on the economic outlook, Bullard on monetary policy and Plosser will remark on both. For data, we have updates on manufacturing, housing and consumer sentiment. My focus though will be on the central bank's preferred inflation figures: the PCE. Last week, a journalist asked Fed Chairwoman Janet Yellen whether the group's focus on the PCE versus the CPI could lead them to be behind the ball. We may very well see if that is indeed the case in this update.

Rather than just look at the individual currency in isolation, we should further consider the dollar's position versus more active counterparts. The world's second most liquid currency - the Euro - is still in the early phases of bleeding the built up premium of its unintended balance sheet contraction. The introduction of new accommodation measures and speculation of an outright purchasing program moving forward mean the two-year EURUSD build up can continue to retrace - providing a distinct benefit to the greenback.

And, while we look to the more probable and proactive considerations, it is important to always keep those 'fat tail' events in mind. Should we see volatility catalyze and appetite for anemic returns meltdown, the dollar will move quickly to absorb panicked funds. Yet, distinguishing between a false alarm and a systemic shift in investor sentiment is critical here. The requirement for confirmation should be materially higher here than just a technical break or a VIX jump. –JK