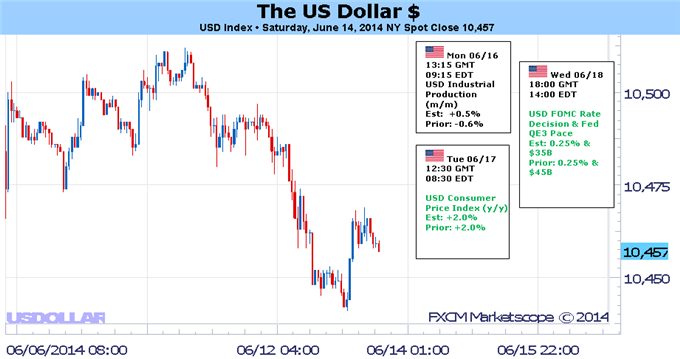 - USDOLLAR broke down to and has started to cut through significant support this week.

- See the DailyFX US Dollar Economic Calendar for the following week.

- Have a bullish (or bearish) bias on the US Dollar, but don’t know which pair to use? Use a US Dollar currency basket.

It’s safe to say that 2014 hasn’t been the bullish US Dollar environment everyone envisioned. Even in the week following a May US Nonfarm Payrolls report that showed headline jobs growth over +200K for the four consecutive month (the first such streak since October 1999 to January 2000), the greenback was one of the worst performing currencies. For perspective, the US Dollar’s outperformance against the Euro and the Swiss Franc only comes after the ECB’s unveiled massive easing steps.

The only slightly-positive yield environment backing the US Dollar is undercut by the weak economic growth environment currently persisting. While there have been tepid signs of a Q2 economic snapback (automobile sales, housing starts, jobless claims, and retail sales), the degree to which the data has rebounded is disappointing. Using the Citi Economic Surprise Index as a proxy for data momentum, the recent lull is apparent. The index reached a yearly low on April 7 at -45.9 then rebounded to 3.3 on May 20, but has since fallen back to -19.5 as of Friday.

Thus between the data momentum being lost and the yield environment in a not-so-favorable shape – lower longer-term interest rates could also signal investors’ expectations about inflation and growth, which are dropping if yields are an indicator – the US Dollar really needs the upcoming June Federal Reserve policy meeting this week to stand and deliver.

The best case scenario for the US Dollar is that the FOMC looks to the 6.3% unemployment rate, which is currently sitting at the top of its year-end prediction range, and determines that, based on the labor market reaching its natural rate sooner than later, it will need to raise interest rates sooner than later, i.e., Q2’15 (currently priced for Q3/Q4’15).

In fact, a great deal of Fed optimism will be required in order to drum up support for the US Dollar – beyond the unemployment rate, there is only scant evidence that inflation will soon achieve the Fed’s threshold at 2%consistenly, which core CPI has been at below for nearly two years (the last time there were two consecutive months of core CPI at +2.0% was June-July 2012). Wage growth remains only modest per the most recent labor market report, and even progress towards fiscal policy action – a minimum wage hike – seems dead in the water during a midterm election year.

Truly, there’s very little good going on for the US Dollar right now, even from a positioning perspective. Overnight index swaps are only pricing in +17.0-bps priced into the USD over the next 12-months, whereas that figure was as high as +39.0-bps on March 17. The retail forex trading crowd remains stubbornly long the US Dollar, especially versus the British Pound (crowd net-short GBPUSD since July 2013), which serves as a contrarian indicator for expectations (i.e., USD weakness). With the USDOLLAR Index technical picture now weakening, the US Dollar needs an optimistic FOMC this week – or else. –CV